New research from The Australian National University (ANU) shows unless conservation actions are urgently stepped up, one of our most beautiful songbirds, the regent honeyeater, will be extinct within 20 years.

The new study reveals current, already intensive, conservation efforts are not sufficient, and a huge redoubling of effort is needed if we are to save these birds from extinction.

“The regent honeyeater population has been decimated by the loss of over 90 per cent of their preferred woodland habitats,” lead author Professor Rob Heinsohn from ANU said.

"Less than 80 years ago, it was one of the most commonly encountered species, ranging from Adelaide to Rockhampton. Now it is on track to follow the dodo into extinction.”

Today there are fewer than 300 regent honeyeaters left, making it one of our rarest bird species. Habitat loss has forced them to compete with larger species for remaining habitat.

The ANU team commenced a large-scale project in 2015 to better understand the regent honeyeater population decline, but found they are an exceptionally difficult bird to study in the wild. As nomads, they wander long distances in search of nectar. After 6 years of intensive fieldwork, the team discovered that the birds’ breeding success has declined due to predation at the nest by species such as pied currawongs, noisy miners and possums.

In their new publication the team built population models utilising all available knowledge to predict what will happen to the wild population.

“We were able to isolate the three key conservation priorities necessary to secure the birds’ future."

First, the models show nest success rates of both wild and released zoo-bred birds must nearly double. This requires protecting nests from predation.

​Second, the number of zoo-bred birds released into the Blue Mountains must increase and be sustained for at least 20 years alongside nest protection. Taronga Conservation Society have been breeding the birds in captivity and are working hard to increase the numbers for release into the wild.

Third, the models stress that the regent honeyeater population can only be secured into the future if more habitat can be protected and restored.

“Without more habitat, reintroductions and nest protection efforts will be futile, because the flock sizes will never reach the critical mass needed for the birds to breed safely without our protection," Professor Heinsohn said.

"Our study provides both hope and a dire warning – we can save these birds, but it will take a lot of effort and resources over a long time to pull it off.”

The research is published in Biological Conservation. It was co-authored by members of the Regent Honeyeater Recovery team including Birdlife Australia and Taronga Conservation Society.

Population viability in data deficient nomadic species: What it will take to save regent honeyeaters from extinction

What will it take to save the regent honeyeater from extinction? 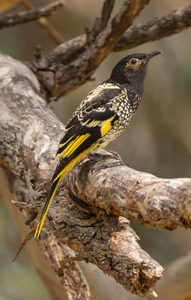