Myrmecomorphy is a phenomenon in which some animals mimic ants morphologically and behaviorally. It is an example of the broader biological phenomenon of mimicry, which is widely distributed in nature.

LUO Cihang, a graduate student supervised by Prof. WANG Bo, and his colleagues from the Nanjing Institute of Geology and Palaeontology of the Chinese Academy of Sciences (NIGPAS) have discovered a new type of alienopterid nymph from mid-Cretaceous Kachin amber of Myanmar. The discovery shows that ant mimicry already existed in the mid-Cretaceous, thereby extending its geological range by approximately 50 million years.

This study was published in Earth-Science Reviews on Dec. 30.

Myrmecomorphy has evolved in more than 2,000 living species of 11 different arthropod orders. However, the fossil record of myrmecomorphy is extremely sparse and researchers know little about its origin and evolution.

By using quantitative geometric morphometric analysis, the researchers discovered that the body shape of these alienopterid nymphs is very close to that of sphecomyrmine ants (a kind of extinct ant). Moreover, the antennae shape and legs of these alienopterid nymphs are close to that of ants, and the ratios of the antennae and legs to body length are approximately the same as in some sphecomyrmine ants.

These results thus suggest that the nymphs and adults of this mid-Cretaceous alienopterid imitate entirely different hymenopteran models. Therefore, according to Prof. WANG, this research probably provides the first fossil record of transformational mimicry, i.e., mimicking different organisms during different stages of development.

This research was supported by the Chinese Academy of Sciences, the Ministry of Science and Technology of China and the National Natural Science Foundation of China.

Life history and evolution of the enigmatic Cretaceous–Eocene Alienopteridae: A critical review 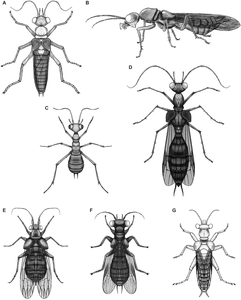 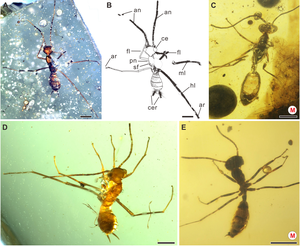 Alienopterid nymphs and ants; ants are marked with “M” 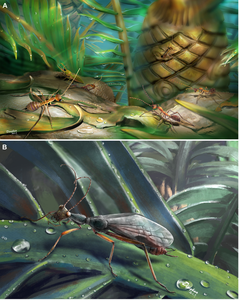