SAN FRANCISCO, CA (January 18, 2022) — The California Academy of Sciences announced the Larry E. Serpa Western North America Aquatic Invertebrate Collection today in honor of late ecologist Larry Serpa, who passed away in May. The donation is one of the largest aquatic invertebrate collections ever received by the Academy, containing 52 drawers of pinned insects, 5 drawers of on-insect invertebrate specimens, 80 drawers of insects in ethanol vials, and 30 bulk crates of specimens in vials. In total there are over 200,000 specimens including 91,900 curated, labeled, and identified specimens; and an additional 25,000 bulk lots of roughly 100,000 identified but unlabeled bulk specimens. The collection will be housed within the Academy’s Department of Entomology.

The donation was made by Serpa’s wife, Lynn Lozier, who worked alongside him as a scientist at The Nature Conservancy for the past 40 years. The Nature Conservancy awarded a $30,000 grant to help support the initial curation of the collection, and a dedicated fund has been established in the hopes of matching this gift to provide the resources needed to steward Serpa's legacy.

“We are very grateful for this contribution, which easily makes the Academy the biggest and best resource for Western aquatic insects. I could hardly believe the size when we went to move it. It took two vans and a flatbed truck to transport it,” Academy Collection Manager Christopher Grinter said. “Scientific collections the size of this one, are rare. It’s an incredibly important dataset for researchers, and these data will be available to scientists and researchers around the world.”

Along with the insect specimens were research notebooks with detailed collecting notes and field codes, as well as an electronic database of the collecting events and inventory of the curated collection.

“What’s perhaps most interesting about this collection isn’t just its sheer volume, but its breadth. Often in collections we see a focus on one particular family or species, over the course of many years. But Larry’s work focused on all aquatic insects, across multiple orders, across hundreds of localities in California. This collection will allow scientists and researchers to not only understand that a particular species was at a certain place at a certain time, but to better understand the entire aquatic ecosystem at a given time and place,” Grinter said.

Since the health and abundance of aquatic invertebrates can serve as a proxy for broader ecosystem health, those insights could lead to a clearer picture of how California’s environment has changed over time—a critical step towards protecting nature in the Golden State and achieving the aims of the Academy’s Thriving California initiative.

Serpa was an aquatic ecologist who spent his entire career with The Nature Conservancy in a variety of roles. His fascination with running waters and the life within them began with his Master’s thesis which focused on the challenge of identifying aquatic insects in their larval state—a phase in which they can spend the majority of their lives. There they play a critical role in the food chain, yet little is known about them. In order to match the larva to the adult it becomes, Serpa reared 90 different species from juvenile nymphs to identifiable adult insects and wrote a key to assist future researchers in identifying the immature stages. He took this fascination forward studying their distribution and habitats across the state. In 46 years, he made over three thousand collections of aquatic insects in 48 California counties from the coast to 11,000 feet, exploring diversity and distribution and finding some species that were thought to be extinct.

“Natural history collections like the one Larry made over his lifetime are essential in science, and they are essential to efforts to protect nature. In this era of global change, we need to understand what's out there, where it is, where it was, and where it might be in the future,” said Scott Morrison, Director of Conservation Science at The Nature Conservancy in California. “Larry Serpa has left a legacy that will be generating science and conservation for centuries into the future. What a privilege to have known someone whose passion produced something so extraordinary.”

This collection was amassed across nearly all ecoregions in California and contains the voucher specimens of important research conducted by Serpa. It also includes rare and threatened taxa not previously held in the Academy’s scientific collections, like Lednia sierra, a stonefly restricted to alpine meltwater lakes that are at risk of drying up in the face of climate change. Specimens have been accessioned, permanently archived in the research collection, and are now freely available to the global research community.

“Larry loved running water and was never happier than when he was in a stream,” said Lozier, a program director at The Nature Conservancy. “He was fascinated by the invertebrates that make up much of the food chain, but whose lives are poorly known.  He loved searching for and identifying them, recording the details of where and how they lived.  He would be thrilled that all the richness he found and documented will be available to scientists all over the world through the California Academy of Sciences.”

By making all of the data in the collection available via open access, researchers, educators, artists, and anyone else that might be interested can better understand the wondrous diversity of these animals, where they lived over the past 40 years, and where they will be moving to in the future.

About the California Academy of Sciences
The California Academy of Sciences is a renowned scientific and educational institution with a mission to regenerate the natural world through science, learning, and collaboration. Based in San Francisco’s Golden Gate Park, it is home to a world-class aquarium, planetarium, and natural history museum, as well as innovative programs in scientific research and environmental education—all under one living roof. Museum hours are 9:30 am – 5:00 pm Monday – Saturday, and 11:00 am – 5:00 pm on Sunday. Admission includes all exhibits, programs, and shows. For daily ticket prices, please visit www.calacademy.org or call (415) 379-8000 for more information.

About Research at the California Academy of Sciences
The Institute for Biodiversity Science and Sustainability at the California Academy of Sciences is at the forefront of efforts to regenerate the natural world through science, learning, and collaboration. Based in San Francisco, the Institute is home to more than 100 world-class scientists, state-of-the-art facilities, and nearly 46 million scientific specimens from around the world. The Institute also leverages the expertise and efforts of more than 100 international Associates and 450 distinguished Fellows. Through expeditions around the globe, investigations in the lab, and analysis of vast biological datasets, the Institute’s scientists work to understand the evolution and interconnectedness of organisms and ecosystems, the threats they face around the world, and the most effective strategies for ensuring they thrive into the future. Through deeply collaborative partnerships and innovative public engagement initiatives, they also guide critical conservation decisions worldwide, inspire and mentor the next generation of scientists, and foster responsible stewardship of our planet.

About The Nature Conservancy
The Nature Conservancy is a global conservation organization dedicated to conserving the lands and waters on which all life depends. Guided by science, we create innovative, on-the-ground solutions to our world's toughest challenges so that nature and people can thrive together. We are tackling climate change, conserving lands, waters and oceans at an unprecedented scale, providing food and water sustainably and helping make cities more sustainable. Working in 72 countries, we use a collaborative approach that engages local communities, governments, the private sector, and other partners. To learn more, visit www.nature.org or follow @conserve_ca on Twitter. 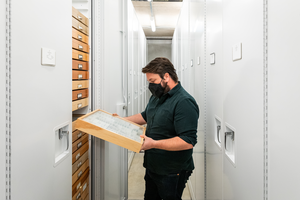