This study is led by Dr. Jianqi Zhang (College of Meteorology and Oceanography, National University of Defense Technology, China) and Professor Chongyin Li (Institute of Atmospheric Physics, Chinese Academy of Sciences, China) et al. The team studied how the widely active mesoscale SST (Sea Surface Temperature ) anomaly and large-scale SST anomaly warming near Kuroshio Extension affects large-scale atmospheric circulation over North Pacific in winter, and whether this influence was significant. If yes ,what are the major dynamical mechanisms?

Researchers found that the mesoscale SST anomaly near the Kuroshio Extension can significantly cause a wide range of positive geopotential height anomaly responses similar to tripolar structure with strengthened poleward shift of westerly anomaly. The anomalous geopotential height presents an obvious equivalent barotropic structure over central-eastern North Pacific, and the mesoscale SST anomaly can also cause a counterclockwise circulation in altitude-latitude cross sections similar to the well-known Ferrel cell, which is accompanied by the poleward shift of baroclinic zone in lower atmosphere. It is easy to think of the positive feedback of the synoptic transient eddy. Through some diagnosis and theoretical analysis, it is found that the poleward shift of baroclinicity in lower atmosphere is forced by eddy thermal forcing, the enhancement of westerly in upper troposphere is forced by eddy momentum flux convergence. These atmospheric circulation anomalies are indeed caused by the positive feedback of the synoptic transient eddy, which also illustrate that the mesoscale SST anomaly has a significant impact on large-scale atmospheric circulation in winter by strengthening the synoptic transient eddy. Large-scale SST anomalyl warming can cause weak baroclinic structure of geopotential height field in the central Pacific, and it can cause clockwise secondary circulation in altitude-latitude cross section. This characteristic is different from the influence of mesoscale SST anomaly on atmospheric circuation. Further diagnosis and analysis by researchers found that the stronger diabatic heating caused by large-scale SST anomaly warming is the main reason for large-scale atmospheric circulation anomaly in winter. 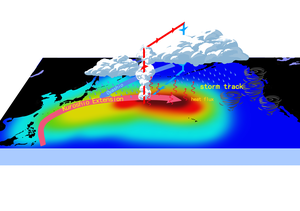 The response of atmospheric circulation to large-scale of SST anomaly