Aliena, a tech spin-off from Nanyang Technological University, Singapore (NTU Singapore), has today deployed into space a nanosatellite fitted with a fuel-efficient engine it has developed. The nanosatellite was sent from the SpaceX Falcon 9’s Transporter-3 mission which launched from Cape Canaveral Space Force Station, Florida, US.

The satellite’s engine, a Hall effect thruster, a type of ion thruster in which ions from the propellant are accelerated by an electric field, was invented and developed by Aliena. Compared to current satellite engines of its type, the new engine consumes just a fraction of power for its operation.

Thrusters are crucial to satellites, as they need them to make occasional thrust firings to keep them in orbit, otherwise they will re-enter Earth’s atmosphere, putting an end to their mission. This is due to the resistive force or drag from the thin atmosphere which they encounter.

Historically, most satellites weighed a few thousand kilogrammes and were huge, measuring as tall as several storeys. Over the last two decades however, miniaturised satellites have been gaining popularity, which led to the development of smaller, lighter, and more fuel-efficient engines that keep satellites functional while in space.

Compared to current Hall thrusters that require around a thousand watts to keep larger satellites in orbit and are unsuitable for smaller spacecrafts, Aliena’s engine can keep a nanosatellite operational with less than 10 watts of power. The entire propulsion system fits into a 10 cm by 10 cm by 10 cm cube and weighs less than two cartons of milk, significantly less than conventional counterparts.

Often referred to as the fourth state of matter, plasma and its physical properties play a key role in Aliena’s engine. The NTU startup taps on plasma propulsion to allow small satellites to move in space with force from as little as a few micro-Newtons, which is comparable to the amount of force an ant uses to take a few steps forward.

Dr Mark Lim Jian Wei, Co-founder and CEO of Aliena, who is also Adjunct Principal Investigator at the Energy Research Institute @ NTU (ERI@N), said: “As the space industry continues to grow exponentially and rapidly, Aliena aims to address a growing demand for in-space mobility through our plasma engines. Once a nascent market, we have seen a sudden surge in the number of space-tech companies being incorporated to capitalise on the cost effectiveness of small satellites and accessibility to space to deploy their own constellations that will impact terrestrial and extra-terrestrial businesses.”

Mr George-Cristian Potrivitu, Co-founder and Chief Technology Officer of Aliena, who is also an NTU PhD candidate, said: “Aliena is focused on developing cutting edge satellite propulsion systems based on plasma, and this mission definitely marks a very important milestone for the private space ecosystem in Singapore, which is rapidly emerging from its nascent phase. With the launch, we will prove that our system functions well in space on a satellite, which is important as we continue to expand our customer base. We want to enable their emerging operations and to help catalyse new business opportunities in space through the provision of unprecedented mobility to small spacecraft, allowing them to execute the most challenging of missions.”

Empowering satellites for the next frontier of space exploration

The Aliena thruster also features other technical innovations that help increase its durability and allows for the instant ignition of the system without the need for external heating for warm-up.

Aliena’s engine is an electric plasma propulsion system that is more fuel efficient as compared to non-electric systems and requires smaller and lighter batteries and fewer solar panels as compared to existing thrusters on the market.

As a result of the fuel efficiency, satellites equipped with an Aliena engine would carry less fuel for missions, giving the satellites more flexibility in executing operations in space.

Providing satellites the ability to adjust their movement to the smallest degree is crucial for purposes such as constellation formation, when satellites require to group together to work as a system. It is also handy for in-orbit maintenance and servicing, as well as other complex operations in space, such as in the 2013 movie Gravity, where actress Sandra Bullock’s character had to use a cold-gas thruster to propel herself to service the Hubble Space Telescope.

Dr Lim added: “We hope the successful launch of the nanosatellite powered by our new engine will pave the way for emerging small satellite operations to be carried out with reduced power consumption, which also improves the usage of a satellite’s capacity.”

Following this mission, Aliena plans to deploy microsatellite-class engines (MUSIC) on a larger satellite platform in 2023 that will be launched onboard Orbital Astronautic’s ORB-12 Strider mission.

Aliena has since secured separate orders from an undisclosed customer and has received interest from other enterprises for the use of its engines in their satellites.

Mr David Toh, CEO of NTUitive, said: “Aliena has achieved a very significant milestone in their product development, and we are pleased as an organisation to have supported the company in all its endeavours to be a successful startup. Aliena is a great example of how university research can be translated and brought to the market rapidly through our funds and support programmes, where we help accelerate the commercialisation process through support in areas such as Intellectual Property and office space, as well as to groom entrepreneurs and pair them up with technology most suited for their businesses.”

Aliena was founded in 2018, after founders Dr Lim and Mr Potrivitu met while working on their PhDs at the Space Propulsion Centre in NTU. The company received a grant by NTU’s innovation and enterprise company NTUitive in 2019, and the technology was test-bedded in the NTU Satellite Research Centre (SaRC).

Aliena first demonstrated the principles behind the engine’s modes of operation at SaRC. The team was provided access to SaRC’s facilities for the assembly of its prototype, and it was also where the engine first demonstrated a successful test launch, a milestone that the Aliena team said helped pave the way for Aliena to close its first oversubscribed funding round.

Spinning-off from NTU, Aliena was also supported by NTUitive through their flagship Strategic Research Innovation Fund (SRIF) that provided capital for the initial research and development required to advance the engine from its prototype.

NTU’s first foray into space began more than 20 years ago. The first project was a communication payload codenamed Merlion launched in 1999, while the main satellite body was developed by the University of Surrey.

NTU has since built and sent nine satellites into Earth’s orbit. The X-SAT, NTU’s microsatellite built in collaboration with Defence Science Organisation, is Singapore’s first locally built satellite which was launched into space in 2011.

Since 2009, NTU has been running Singapore’s first satellite programme for undergraduates and postgraduates. 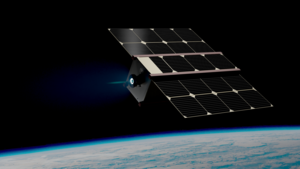