Mutations of DNA do not occur as randomly as preciously assumed, according to new research from Max Planck Institute for Biology Tübingen in Germany and University of California Davis in the US. The findings have the potential to dramatically change our view of evolution. The insights have far-reaching implications, from better knowledge of crop domestication to predictions of the mutational landscape in cancers.

Mutations, which occur when DNA is damaged and left unrepaired, are the major fuel of evolution. A central assumption of Darwin’s theory of evolution is that they arise randomly, and that only natural selection determines which genes change more quickly and which more slowly in the course of evolution. This core assumption has now been upended. “We always thought of mutations appearing solely by chance across the genome,” says Grey Monroe, an assistant professor in the UC Davis Department of Plant Sciences and first author of the paper. “It now turns out that the pattern of mutation is not only very non-random, but also that it’s non-random in a way that benefits the plant.” “This is a completely novel perspective on mutation and the way evolution works,” comments Detlef Weigel, scientific director at the Max Planck Institute for Biology and senior author of the study.

Researchers grew specimens of the widely distributed weed Arabidopsis thaliana in a sheltered lab environment, where all plants, including ones with harmful mutations, could reproduce. Such harmful mutations would normally be quickly removed by the selection pressures that prevail in nature and therefore disappear before they could be observed. By analyzing the genomes of hundreds of lab grown plants, the scientist could identify thousands of mutations as they arose.

Sophisticated statistical analyses revealed that these mutations were by no means randomly distributed in the genome, as the researchers had expected. Instead, they found stretches of the genome where mutations were rare, and others where mutations were much more common. In those regions with few mutations, genes needed in every cell and thus essential for the survival of every plant were greatly overrepresented. “These are regions of the genome most sensitive to harmful effects of new mutations,” Weigel says, “and DNA damage repair seems therefore to be particularly effective in these regions.”  It is as if evolution were playing with loaded dice – it minimizes the risk of damaging the most vital genes.

The scientists found that the different types of proteins around which DNA is wrapped in the cell nucleus are highly correlated with the appearance of mutations. “It gives us a good idea of what’s going on, so that we can predict which genes are more likely to mutate than others,” Monroe says.

Weigel stressed how entirely unexpected the results were in the light of classical evolutionary theory: “It has long been known that during the course of evolution certain regions of the genome accumulate more mutations than other regions do. At first glance, what we found seemed to contradict accepted wisdom that this just reflects natural selection removing most mutations before they can actually be observed,” he explains. However, despite the uneven distribution of mutations in a typical genome, the important regions are not entirely devoid of them, and these regions can therefore also evolve, although at a slower pace than other parts of the genome.

“The plant has evolved a way to protect its most important genes from mutation,” Monroe says. “This is exciting because we could even use these discoveries to think about how to protect human genes from mutation.” In the future, one might use them to predict which genes are best targets for breeding because they evolve fast, or which are most likely to cause disease in humans.

Beating the odds in mutation’s game of chance 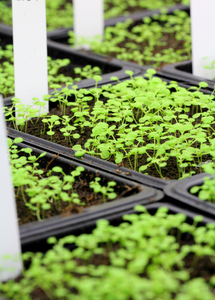