A quantum annealer with more than 5,000 qubits has been put into operation at Forschungszentrum Jülich. The Jülich Supercomputing Centre (JSC) and D-Wave Systems, a leading provider of quantum computing systems, today launched the company’s first cloud-based quantum service outside North America. The new system is located at Jülich and will work closely with the supercomputers at JSC in future. The annealing quantum computer is part of the Jülich UNified Infrastructure for Quantum computing (JUNIQ), which was established in autumn 2019 to provide researchers in Germany and Europe with access to various quantum systems. Federal Minister of Education and Research Bettina Stark-Watzinger, Minister-President of North Rhine-Westphalia (NRW) Hendrik Wüst, and European Commissioner Mariya Gabriel officially put the system into operation during a ceremony held today, at which they highlighted the importance of collaboration in the development of practical quantum applications across industry sectors and research fields. The state government of NRW and the Federal Ministry of Education and Research (BMBF) are each providing € 5 million in funding to support the establishment of JUNIQ.

“Quantum computers promise enormous opportunities for our future and for research in Germany. They have the potential to transform our everyday lives for the better – with regard to making optimal use of our power grid, optimizing investment strategies in the financial market, or designing more effective medicines. This is why the Federal Research Ministry is providing intensive, broad-based support for quantum computer development. Today’s launch of a quantum annealer in the JUNIQ user infrastructure is a further important step to propel Germany and Europe to an international leadership role in quantum computing.”
Federal Research Minister Bettina Start-Watzinger

“Bringing quantum and supercomputing technologies together is key to supporting advanced scientific discoveries. It is like opening doors to new worlds with great innovation potential. Academics, businesses, and other organizations will be able to access this revolutionary technology now physically located in Europe, driving real-world value.”
Mariya Gabriel, European Commissioner

“The user infrastructure JUNIQ and the commissioning of the quantum annealer in Jülich impressively demonstrate North Rhine-Westphalia's development into a top European location for quantum computing. Our outstanding scientific landscape and the close networking of our players in science and industry make it possible to fully exploit the potential of these technologies”
Minister-President of NRW Hendrik Wüst

Forschungszentrum Jülich has set itself the goal of establishing a leading development and user community from industry and science for quantum computing applications in Germany and throughout Europe. “To achieve this goal, we established JUNIQ as a user facility for open innovations at the Jülich Supercomputing Centre in 2019. It provides users with a uniform quantum computing platform as a service and also offers them the relevant expertise for user support and joint software development,” explains Prof. Wolfgang Marquardt, Chairman of the Board of Directors of Forschungszentrum Jülich. “Through JUNIQ, we provide users and developers with service-oriented access to our unique Jülich quantum computing ecosystem. This offers users the best conditions to rapidly accelerate the utilization of quantum computers thanks to its excellent technical infrastructure and, above all, the pooling of our considerable expertise in the fields of supercomputing and quantum technologies.”

The new quantum system is the second D-Wave quantum computer to be used within the JUNIQ user infrastructure and is the world’s first Advantage quantum annealer to be located outside the company’s home country, Canada. “We operate the system directly here at Jülich. This gives us the opportunity to integrate it closely with our supercomputing infrastructure,” explains Prof. Kristel Michielsen, a quantum computing pioneer and head of the Quantum Information Processing group at JSC. This enables experts at Jülich to gain experience in operating and maintaining such a machine and helps to transfer important knowledge to Germany. Moreover, access to this system is subject to German legislation and checks.

“Given the extent to which companies and research institutions are identifying important problems that require investments in quantum computing, the marketing potential for quantum computing will grow at a faster rate than ever before,” says Alan Baratz, CEO at D-Wave Systems. “This particularly applies to Europe, where we are seeing increasing interest from companies, universities, and even government institutions. We look forward to combining Jülich’s expertise in the field of deep computing with D-Wave’s ability to scale and commercialize transformative technologies. I am proud that this is the first commercial quantum computimg system in-region in Europe, deepening the impact of quantum computing in Europe and am excited about the innovations and applications that will emerge from the system.”

The new system is an annealing quantum computer. This type of quantum system is particularly well suited for solving challenging optimization problems that are particularly relevant to industry. These include the efficient control of traffic flows and the training of neural networks for artificial intelligence applications. D-Wave is a leading manufacturer of such quantum systems. Clients of the company have developed early quantum applications in a diverse range of areas such as financial modelling, flight planning, election modelling, quantum chemistry simulation, automotive engineering, healthcare, logistics, and more.

“We’re also looking at ways to integrate the new system into our supercomputing infrastructure. At that time, to the best of our knowledge, this would be the first instance of a quantum computer working directly with a supercomputer,” says Prof. Thomas Lippert, director of the Jülich Supercomputing Centre. “This is made possible because the quantum annealer has over 5,000 qubits and is therefore big enough to help with application-related problems that are typically calculated on supercomputers.” The quantum annealer is a quantum computer that has been developed with a view to industrial applications. It also has a number of special features that users of the JUNIQ infrastructure can access, such as the new Advantage performance update, incorporating the highly connected Pegasus topology, and unprecedented high performance in a commercial quantum system.

A new building, which was also officially opened today, was erected for the operation of the annealing quantum computer. Quantum computing systems require a special, vibration-free location. The building’s two machine halls therefore feature special vibration-damping foundations to absorb tremors. Alongside the D-Wave system, the building will host an additional quantum computer as of next year. 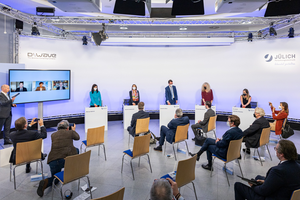