Scientists have named a newly discovered species of worm that kills tarantulas after American actor, musician and producer Jeff Daniels, a distinction no other entertainer can claim.

There are more than 25,000 described species of these worms, called nematodes, and they are one of the most abundant animals on Earth. However, this is only the second time one has ever been found to infect tarantulas.

They named it Tarantobelus jeffdanielsi, because Daniels’ character in the 1990 film Arachnophobia saves a town from a deadly infestation of spiders.

“His character in the film is a spider killer, which is exactly what these nematodes are,” said UC Riverside parasitologist Adler Dillman, who led a team that discovered the nematode.

“When I first heard a new species of nematode had been named after me, I thought, ‘Why? Is there a resemblance?’ joked Daniels, in remarks to UCR. “Honestly, I was honored by their homage to me and Arachnophobia. Made me smile. And of course, in Hollywood, you haven’t really made it until you’ve been recognized by those in the field of parasitology.”

The team’s work describing jeffdanielsi has recently been published in the Journal of Parasitology.

In September 2019, a wholesale tarantula breeder contacted Dillman for help identifying a mysterious infection in some of their tarantulas. Specimens sent for inspection had an odd white mass around the mouth area. Dillman, who teaches the only parasitology class at UCR, recognized the white areas immediately as nematodes.

Previously, scientists in Europe identified the first nematodes found on tarantulas. However, that research examined only the worms themselves; not the worms as found on the spiders.

Once infected, tarantulas begin to exhibit strange behaviors like walking around on tiptoe and not eating. The appendages that control the tarantula’s fangs also stop working.

“It may take months because tarantulas don’t have to eat particularly often. However, if they get this infection, they will die of starvation,” Dillman said.

In addition to confirming that jeffdanielsi infection is lethal, Dillman’s team learned how the worms reproduce, and where on the spiders they reside.

Jeffdanielsi are mostly self-fertilizing hermaphrodites that produce their own sperm and eggs. On average, Dillman said a single hermaphrodite can produce 160 babies in its lifespan. In the laboratory, that lifespan is 11 days. It isn’t clear how long they can live on a tarantula.

The research team also found that the nematodes only inhabited the mouth area — none were in the stomach, nor did they appear to cause damage to the exterior of the tarantulas.

“It isn’t clear that the nematodes feed on the spider itself. It’s possible that they feed on bacteria that live on the tarantulas,” Dillman said. When the researchers grew the worms in the laboratory, they ate e. coli, making a stronger case that they are generally bacteria eaters.

One mystery that remains to be solved is how the nematodes are able to change the tarantulas’ behavior and paralyze their pedipalps, the organs that control their fangs.

Dillman is planning additional studies to understand this, as well as how breeders can treat or even prevent jeffdanielsi infections.

Though identifying a tarantula parasite is rare, Dillman believes this says more about the number of people that study tarantulas rather than the likely uniqueness of nematodes infecting them.

“Nematodes have been around for hundreds of millions of years. They’ve evolved to infect every kind of host on the planet including humans,” he said. “Any animal you know of on planet Earth, there’s a nematode that can infect it.” 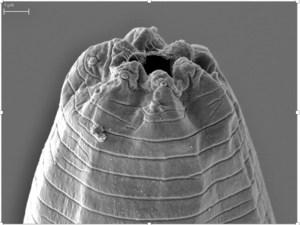