An online platform developed with the aim to support stakeholders of water management in integrated strategies and actions to adapt to climate change and to prevent and reduce the associated risks: the just-released CC-ARP-CE tool is the TEACHER-CE  (joinT Efforts to increase water management Adaptation to climate CHanges in central EuRope) project’s main output. The CC-ARP-CE is an online tool that helps users to identify climate adaptation measures for different fields of actions and various land uses in the water management sector, with the idea to make municipalities and regions in Central Europe more resilient to extreme weather events potentially exacerbated by climate change.
“The CC-ARP-CE focuses on the climate-proof management of water-related issues such as flood, heavy rain and drought risk, small water retention measures and protection of drinking water sources” explains Guido Rianna, CMCC scientist at REMHI - Regional Models and geo-Hydrological Impacts and CMCC scientific leader of the project. “The result of using this tool is a comprehensive overview of the water related issues and proposed selection of corresponding measures, including the assessment of the impact of climate change and the reference to the national water management tools. This will support the development of river management plans and the integration of soft and Nature Based Solutions in specific river basins.”

Started in March 2020, the project TEACHER-CE (joinT Efforts to increase water management Adaptation to climate CHanges in central EuRope) aimed to develop a strategy and a suite of integrated tools to support communities, decision makers, experts and professionals dealing with land and water resources management, handling and managing the design and implementation of efficient adaptation actions to tackle climate change. More in detail, six Fields of Actions were identified: water scarcity and drought management; pluvial floods; river floods; ecosystems directly depending on water resources, irrigation management, groundwater management, drinking water resources management.
The project is coordinated by University of Ljubljana and includes 12 partners from 8 different countries; among the Italian partners are the CMCC Foundation (www.cmcc.it), and the Po River Basin District Authority (https://adbpo.gov.it/), and PEFC (Programme for the Endorsement of Forest Certification schemes; https://www.pefc.it/) as associated partner.

TEACHER-CE has been funded by current Central Europe Programme with the aim to integrate and harmonize results of previously funded projects in the framework of the same Programme, such as the Interreg projects RAINMAN, a project focused on risks of heavy rain events; FRAMWAT, a project focused on the design and realization of small water retention measures for floods, droughts and pollution mitigation; SUSTREE, focused on adaptation of forest ecosystems to climate change; PROLINE-CE, aimed at improving protection of drinking water resources as well as protection against floods/droughts in order to facilitate implementation of existing strategies and management plans (the CMCC was partner of this project, editor’s note). In particular, these projects have been taken into consideration to provide indications and tools to better manage extreme weather events such as heavy rain, droughts and floods, in different land use and water management contexts. Based on these results, the Toolbox concept was developed.

The toolbox includes a web map service that provides a spatial orientation on all identified issues in water management, provides information on climate change scenarios with key indicators, provides navigation through EU and national data portals, links to the tools developed in past EU projects and provides an integrated comprehensive catalogue of measures.
“The CMCC Foundation, which in the framework of the project provided data and information about the expected impacts of climate change on water resources in Central Europe, was in particular involved in the assessment of climate indicators integrated in the toolbox”, Guido Rianna explains. “The map shows expected variations in climate indicators, potentially due to climate change. Climate indicators are used as proxies for impacts that could affect water management in Central Europe. More in detail, for each climate indicator two different time horizons, short-term (2021-2050 vs 1971-2000) and long-term (2071-2100 vs 1971-2000), and two different IPCC Representative Concentration Pathways (RCP4.5, representing an intermediate mitigation scenario, and RCP8.5, representing a scenario without measures against climate change put in place) were considered. The models used for the estimation of the indicators are included in the ensemble simulations at 12 km resolution developed as part of the international EURO-CORDEX initiative (https://www.euro-cordex.net/). The value shown by the maps refers to the median value. "

The Toolbox also provides tools and guidelines developed in other projects, and an overview of the existing national and EU tools (GIS tools and data portals) accessible through the CC-ARP-CE. The links are categorized on national level and by Fields of action in water management. “Moreover, the Toolbox includes a decision support system directly derived from GOWARE, the online platform developed in the framework of the project PROLINE-CE”, Rianna concludes. “A catalogue of measures shown according to filters and selection of weights of criteria (cost, multi-functionality, robustness, duration and complexity of implementation), leading to the identification of the most appropriate measures to support decision makers in water management.”

The toolbox has been developed and validated in 9 pilot activities with a direct involvement of stakeholders; in Italy, the area of interest selected was the Enza river basin.
The Toolbox can be found at: http://teacher.apps.vokas.si/

The CMCC Foundation is partner of the project with three CMCC divisions involved: REMHI, RAAS and IAFES. The CMCC scientific leader of the project is Guido Rianna, CMCC researcher at REMHI - Regional Models and geo-Hydrological impacts.

The CMCC is co-leader of the WP dedicated to the development of a climate-proof suite of tools included in the “Integrated toolbox for climate change adaptation and risk prevention” (CC-ARP-CE) and has been mainly involved in providing data and information about the expected impacts of climate change on water resources in Central Europe, and in carrying on the development of tools built in previous and ongoing funded projects concerning the identification of Best Management Practices for the protection of water resources and the assessment of soil losses induced by water erosion.

The CMCC had in particular the opportunity of carrying on the development and improvement of tools built in previous funded projects: the Decision Support Tool GOWARE (Transnational Guide Towards an Optimal WAter Regime) from PROLINE-CE Project and the web App “Soil Erosion” developed as Demo Case within Copernicus Climate Change Service (C3S). Furthermore, by exploiting its expertise, the other tools included in the TEACHER CE toolbox properly assessed and accounted for the potential impacts of climate changes in Central Europe area.

For more information, visit the official website of the TEACHER-CE project. 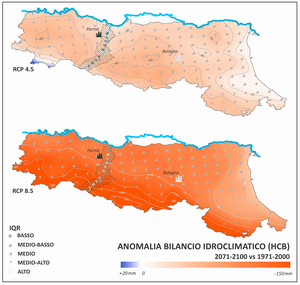 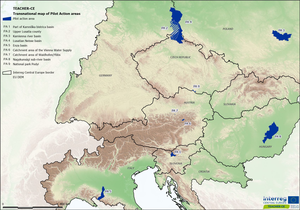