A salt used to create a green rocket fuel is known to decompose metals—such as those in metal propellant storage tanks. Recent research at the University of Illinois Urbana-Champaign found that there are also trace metals in the fuel itself and investigated a way to slow the decomposition using compounds that bind to metals.

“We knew from previous studies that metals work as a catalyst for decomposition in hydroxylammonium nitrate—a flight-proven monopropellant that you don’t have to wear a HAZMAT suit around—but we didn’t know the rate it decomposes, particularly when it’s exposed to heat,” said Emil Broemmelsiek, a Ph.D. student in the Department of Aerospace Engineering at UIUC.  “The study I did focused on atmospheric pressure, so more like storage conditions. Over time, HAN in storage can dissolve the steel tank, which contains enough iron to catalyze the decomposition process.

“In the HAN samples from the manufacturer, we found trace amounts of metals—about a part-per-million level—but even those trace impurities have a catalytic effect. In this study, I checked the temperature at which it decomposes and how fast it decomposes. Then I used additives to see if they could be used to remove the metals. And it worked.”

Broemmelsiek said, in a combustion chamber environment, a propellant based on HAN would decompose faster at the much higher temperature and pressure. “According to my results, I would not expect the inherent impurity to do anything significant, but it did catalyze.”

He used a thermograph metric analyzer analysis—basically, a fancy scale—to hold the HAN at a constant temperature. He found that the material slowly decomposes at 75 degrees Celsius, or 167 Fahrenheit.

Broemmelsiek said the word chelate come from a Greek word that means “claw.” The additive compounds grab the trace metals like a claw and form a chelate complex, which is a very stable molecule that can serve to sequester the metal.

“My hypothesis was that after adding these chelating agents, they would form a stable complex and any metal ions and not react with the propellant and catalyze it. I found that they, in fact, do bind with the chelating agent and stop the metal Ion from reacting with the HAN. The blue and red color changes in the HAN solution demonstrated that reaction.”

About the research, co-author and Broemmelsiek’s adviser Joshua Rovey, said “Emil’s work is the first to show and quantify the effect of additives on the storability of a new propellant we’ve developed that is specifically designed for multimode space propulsion.  We’ve learned that additives can reduce the decomposition rate of the propellant by sequestering or chelating metal ions that cause reactions that degrade the propellant.  This helps keep the propellant stable longer while in a storage tank on a spacecraft.”

Although Broemmelsiek measured some significant changes, he said it wasn’t a large enough difference to warrant recommending the use of the additives.

“We learned from this that metals are present and react and that the rate of decomposition increases as the temperature increases. And we learned more about the characteristics of how the propellant decomposes. This work, not only is a good review of the main decomposition mechanisms are, it also sheds some light on how you might use an additive to slow the decomposition,” he said.

The study, “Effect of Metal Sequestrants on the Decomposition of Hydroxylammonium Nitrate,” was written by Emil Broemmelsiek and Joshua Rovey from UIUC and by Steven Berg from Froberg Aerospace in North Carolina. It is published in the journal Catalysts. DOI: 10.3390/catal11121488

The work was partially funded by NASA.

Effect of Metal Sequestrants on the Decomposition of Hydroxylammonium Nitrate 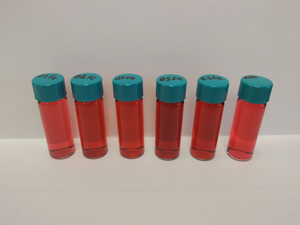