152 billion tonnes of fresh water – equivalent to 20 x Loch Ness or 61 million Olympic sized swimming pools, entered the seas around the sub-Antarctic island of South Georgia when the megaberg A68A melted over 3 months in 2020/2021, according to a new study.

In July 2017, the A68A iceberg snapped off the Larsen-C Ice Shelf on the Antarctic Peninsula and began its epic 3.5 year, 4000 km journey across the Southern Ocean. At 5719 square kilometres in extent – quarter the size of Wales –, it was the biggest iceberg on Earth when it formed and the sixth largest on record. Around Christmas 2020, the berg received widespread attention as it drifted worryingly close to South Georgia, raising concerns it could harm the island’s fragile ecosystem.

Researchers from the Centre for Polar Observation and Modelling (CPOM) and British Antarctic Survey (BAS) used satellite measurements to chart the A68A iceberg’s area and thickness change throughout its life cycle. The authors show that the berg had melted enough as it drifted to avoid damaging the sea floor around South Georgia by running aground. However, a side effect of the melting was the release of a colossal 152 billion tonnes of fresh water in close proximity to the island – a disturbance that could have a profound impact on the island’s marine habitat.

For the first two years of its life, A68A stayed close to Antarctica in the cold waters of the Weddell Sea and experienced little in the way of melting.  However, once it began its northwards journey across Drake Passage it travelled through increasingly warm waters and began to melt.  Altogether, the iceberg thinned by 67 metres from its initial 235 m thickness, with the rate of melting rising sharply as the berg drifted in the Scotia Sea around South Georgia.

Laura Gerrish, GIS and mapping specialist at BAS and co-author of the study said:

“A68 was an absolutely fascinating iceberg to track all the way from its creation to its end. Frequent measurements allowed us to follow every move and break-up of the berg as it moved slowly northwards through iceberg alley and into the Scotia Sea where it then gained speed and approached the island of South Georgia very closely.“

If an iceberg’s keel is too deep it can get stuck on the sea floor. This can be disruptive in several different ways; the scour marks can destroy fauna, and the berg itself can block ocean currents and predator foraging routes. All of these potential outcomes were feared when A68A approached South Georgia. However, this new study reveals that it collided only briefly with the sea floor and broke apart shortly afterwards, making it less of a risk in terms of blockage.  By the time it reached the shallow waters around South Georgia, the iceberg’s keel had reduced to 141 metres below the ocean surface, shallow enough to avoid the seabed which is around 150 metres deep.

Nevertheless, the ecosystem and wildlife around South Georgia will certainly have felt the impact of the colossal iceberg’s visit.  When icebergs detach from ice shelves, they drift with the ocean currents and wind while releasing cold fresh meltwater and nutrients as they melt. This process influences the local ocean circulation and fosters biological production around the iceberg. At its peak, the iceberg was melting at a rate of 7 metres per month, and in total it released a staggering 152 billion tonnes of fresh water and nutrients.

Anne Braakmann-Folgmann, a researcher at CPOM and PhD candidate at the University of Leeds’ School of Earth and Environment, is lead author of the study. She said:

“This is a huge amount of melt water, and the next thing we want to learn is whether it had a positive or negative impact on the ecosystem around South Georgia“

“Because A68A took a common route across the Drake Passage, we hope to learn more about icebergs taking a similar trajectory, and how they influence the polar oceans”.

The journey of A68A has been charted using observations from 5 different satellites. The iceberg’s area change was recorded using a combination of Sentinel-1, Sentinel-3, and MODIS imagery.  Meanwhile, the iceberg’s thickness change was measured using CryoSat-2 and ICESat-2 altimetry. By combining these measurements, the iceberg’s area, thickness, and volume change were determined.

“Our ability to study every move of the iceberg in such detail is thanks to advances in satellite techniques and the use of a variety of measurements. Imaging satellites record the location and shape of the iceberg and data from altimetry missions add a third dimension as they measure the height of surfaces underneath the satellites and can therefore observe how an iceberg melts. “

The lead author of the paper, Anne Braakmann-Folgmann, can be contacted at eeabr@leeds.ac.uk with further questions or detail requests about the paper and in general about icebergs.

Animation 1: Movement of the A68A iceberg from calving off the Larsen-C Ice Shelf in July 2017 to its disintegration near South Georgia in early 2021. The shape, size and location of the iceberg were sourced from Sentinel-1, Sentinel-3 and MODIS satellite data. Underlying ocean depth is based on GEBCO Compilation Group (2019) and Hogg et al. (2016).

Animation 2: Thinning and breakage of the A68A iceberg over time. Melt rates increase sharply once the iceberg is drifting in open ocean north of the Antarctic peninsula. Iceberg thickness was derived from satellite altimetry data from Cryosat-2 and ICESat-2. Iceberg shape and size were sourced from Sentinel-1, Sentinel-3 and MODIS satellite data.

Animation 3: 3D view of the A68A iceberg. Breakage and thinning can be observed – especially towards the end. Iceberg thickness was derived from satellite altimetry data from Cryosat-2 and ICESat-2. Iceberg shape and size were sourced from Sentinel-1, Sentinel-3 and MODIS satellite data.

Animation 4: Journey of the A68A iceberg from the Larsen C Ice Shelf at the Antarctic Peninsula, across the Weddell Sea, through the deep ocean of Scotia Sea and approaching South Georgia at the end of its lifetime. The warming ocean conditions led to the thinning and shrinking of the berg. Elevation and ocean depth are based on IBCSO and GEBCO data (Arndt et al., 2013; GEBCO Compilation Group, 2019) and ocean temperature is derived from the World Ocean Atlas (WOA, Boyer et al., 2018). Iceberg positions and length are taken from the Antarctic Iceberg Tracking Database (Budge and Long, 2018) and iceberg thickness is calculated from satellite altimetry data.

Observing the disintegration of the A68A iceberg from space 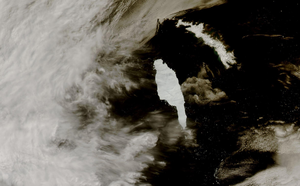 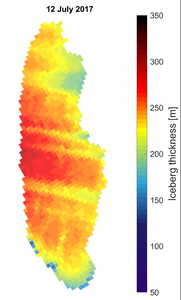