Branching marine worms are bizarre creatures with one head but a body that branches over and over again into multiple posterior ends. Until now, only two species of these curious beasts, thought to be extremely rare, were known. However, a third species has been discovered and described by an international research team led by the University of Göttingen. The worm, named Ramisyllis kingghidorahi after King Ghidorah, Godzilla’s monster enemy, was discovered in Japan. The findings were published in Organisms Diversity & Evolution.

Japanese researchers found the branching worm and sent images to Professor M. Teresa Aguado, University of Göttingen. Aguado immediately recognized that this was a special discovery and organized a field trip to the Island of Sado in Japan. The new species is named after King Ghidorah, the three-headed, two-tailed, and monstrous arch-enemy of Godzilla, both characters based on Japanese mythology and folklore. “King Ghidorah is a branching fictitious animal that can regenerate its lost ends, so we thought this was an appropriate name for the new species of branching worm,” says Aguado.

These branching worms live inside the internal canals of sea sponges. The new discovery means that there are now three known species: Syllis ramosa McIntosh, found in 1879 in the Philippines, which lives in deep-sea glass sponges; Ramisyllis multicaudata, found in 2012 north of Australia; and the new Ramisyllis kingghidorahi, from Japan. The two most recently discovered worms inhabit different types of stony sponges found in shallow water. “We were astonished to find another of these bizarre creatures with only one head and a body formed from multiple branching. The first worm was thought to be unique,” Aguado says, “this discovery reveals a higher diversity of these tree-like animals than anyone expected.”

A multidisciplinary team of scientists from Germany, Spain, Australia and Japan described this new species by combining their expertise in morphology, internal anatomy, ecology, phylogeny, genetic divergence and mitochondrial genomics. The evolutionary relationships obtained from molecular analyses reveal that the two most recently found branching worms, from North of Australia and Japan, share a common ancestor. However, they also show high genetic divergence, together with ecological and morphological differences, mostly concerning the shape of certain body segments. The asymmetrical branching body may have been inherited from their last common ancestor, which had probably already adapted to live inside a sponge canal system. The capacity to produce new posterior segments throughout their whole lives (typical of many worms), together with their regenerative capacities and the worms’ ability to produce several simultaneous newly formed segments during reproduction, may be the basis of the evolution of a branching body.

Many mysteries remain despite these worms having a history of over a hundred years. Aguado explains: “Scientists don’t yet understand the nature of the relationship between the branching worm and its host sponge: is it a symbiotic relationship where both creatures somehow benefit? And how do the worms manage to feed to maintain their huge bodies having just one tiny mouth in their single head?” 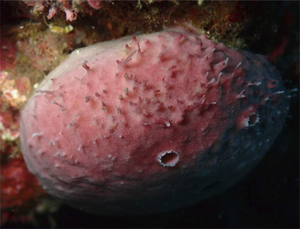