Lots of bats echolocate-- they emit high-pitched squeaks, and based on how those sound waves bounce off their surroundings, they're able to navigate in the dark and find insects to eat. But a lot about how bats evolved these sonar capabilities has been a mystery to scientists, until now. A new paper in Nature is the world’s first study to compare the inner ear structures of the two main groups of bats. By examining the microscopic inner ears of bats from 19 of the 21 known bat families, the researchers were able to show that the presence of extra neurons and specialized ear structures align with a split in bat evolution revealed by DNA.

“This is the first physical evidence we have to support what genetic data tell us about the split of bats into two major groups,” says Bruce Patterson, the Field Museum’s MacArthur Curator of Mammals and one of the study’s authors. “It represents the greatest structural innovation in mammalian ears since the Jurassic, and it helps solve the mystery of how bats evolved the echolocating abilities we see today.”

“Biologists have always speculated that two major groups of bats have different ways of seeing the world through sound,” says the study’s lead author Benjamin Sulser, a PhD student at the American Museum of Natural History and graduate of the University of Chicago, where he worked with Patterson and UChicago Professor of Organismal Biology and Anatomy  Zhe-Xi Luo. “This is the first time we found different neuroanatomies in the inner ear, which give these bats different ways of processing the echolocating signal.”

For a long time, scientists divided bats into Megachiroptera, the big fruit bats reliant on vision, and Microchiroptera, the little bats that use echolocation to find bugs. Genetic analyses in the past couple decades showed that this categorization needed an update, because there were some little echolocating bats that were more closely related to big fruit bats than to their fellow echolocaters. So researchers proposed a new way to classify bats, based on how closely related they are to each other. Bats have since been split into two main groups: Yinpterochiroptera and Yangochiroptera-- the yin and yang of bats.

“It’s become clear that genetic analysis is the best way for us to reconstruct the evolutionary history of these bats, but we had such a clear genetic signal that there were two groups, we thought there had to be some physical traits that aligned with this striking genetic split,” says Patterson.

The researchers set about looking for physical traits that separated the yin bats from the yang. One clue lay in the bats’ methods of echolocation. “Yin and yang bats echolocate differently,” explains Patterson. “Not all yin bats echolocate, but the ones that do use a constant wavelength frequency, and they make a lot of these calls-- about a third of the time, they're actively emitting sounds in hopes of something bouncing back,” says Patterson, “whereas Yangochiroptera will emit a signal and be silent for a long period of time, but the sounds they make vary in pitch and frequency.” Since ears are the organ that processes those echolocation signals, the researchers’ first stop was the bats’ inner ears.

The researchers CT scanned 31 bat skulls from the Field Museum’s collections, along with several from the American Museum of Natural History in New York. The bats represented 39 different species from 19 of the 21 known bat families. Most of the bat skulls the scientists examined were about the size of a large blueberry, meaning that the tiny organ in the inner ear responsible for hearing, the cochlea, was about the size of a poppy seed. And deep inside this tiny poppy seed-sized cavity lay the key physical differences between yin and yang bats.

All mammals, including bats, are able to hear thanks to tiny hairs deep inside their cochlea. When sound waves cause these hairs to vibrate, swirled masses of nerve cells connected to those hairs pick up the signal and translate it into an electrical impulse that gets transported to the brain.

CT scans of the bats’ brains revealed huge differences in these tiny structures. The yin bats’ ears were a lot like ours, including a thick bony canal wall packed with nerve endings to protect the spiral nerve cells. The yang bats, one the other hand, had extra neurons for processing sound waves and were missing the protective bony canal. The extra space afforded by the missing canal walls gives the nerve cells room to evolve into increasingly complex shapes.

“All mammals going back to the mid-Jurassic have these bony canal walls, but yang bats are missing them,” says Patterson. “The evolution of yang bats without this canal is the greatest structural innovation in all mammalian ears that we’ve ever seen.”

“We hypothesize that by developing this new configuration, without the space constraint on the inner ear ganglion, the yang bats have a greater capacity for the ganglion cells to multiply and different ways to connect to the brain, unlike most other mammals,” says Luo. “A greater size of the ganglion and a greater number of neurons may have contributed to this big evolutionary diversification of bats relying more on frequency modulating echolocation.” The hypothesis might account for why there are so many more species of yang bats than yin: the ability to evolve more specialized inner ears could open them up to a wider variety of habitats and prey.

Patterson says that the study is important because it deepens our understanding of how bats came to be such a diverse group. “In the 52 million years since the earliest known bats lived, they've exploded into one of the most successful mammals on Earth. Twenty percent of mammal species are bats, and they're crucial for our planet and for human activities like agriculture, since they eat so many pest insects.” says Patterson. “This study helps explain how they were able to diversify so much and so rapidly.”

Evolution of Inner Ear Neuroanatomy of Bats and Implications for Echolocation 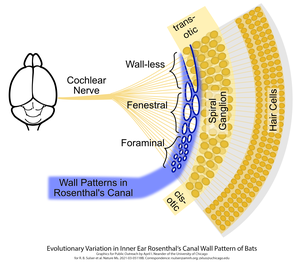 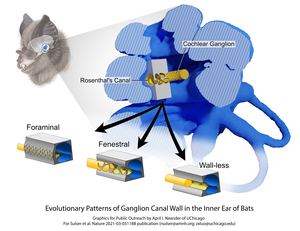 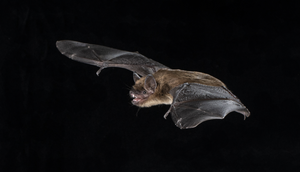