A new study predicts that climate change will result in near-total to total loss of existing locations where coral reefs are sheltered from rising ocean temperatures. Adele Dixon of the University of Leeds, U.K., and colleagues present these findings, which are at higher resolution than any previous analysis, in the open-access journal PLOS Climate on February 1, 2022.

As climate change progresses, rising ocean temperatures threaten coral reefs around the world. However, in some locations, local ocean dynamics such as upwelling and strong currents were thought to buffer the effects of warming seas, providing protection to reefs. Nonetheless, it was not known if these “thermal refugia” would decline as Earth continues to warm.

To clarify the extent of future loss of thermal refugia, Dixon and colleagues applied the most up-to-date global climate projections from the Coupled Model Intercomparison Project—CMIP6. Using a technique known as statistical downscaling, they combined CMIP6 projections with 1-kilometer resolution satellite data on daily sea surface temperatures around the world. This enabled them to examine the future of thermal refugia at unprecedented resolution.

The researchers found that, currently, about 84 percent of the world’s coral reefs lie in thermal refugia, but predict that will drop to just 0.2 percent if temperatures rise 1.5°C above pre-industrial levels, and to 0 percent if temperatures rise by 2°C. Small areas of refugia may remain, particularly in the East Indian Ocean Sumatra-Java region, but only rarely, suggesting the likelihood of catastrophic loss of coral reefs.

This analysis highlights different effects in different regions. For instance, thermal refugia are predicted to first disappear from higher-latitude reefs. At 1.5°C of warming, thermal refugia will disappear from all but two of twelve regions worldwide: Polynesia and the Coral Triangle in the western Pacific Ocean. Refugia will be lost from regions such as Oman, the Caribbean, Colombia, and Indonesia.

These findings provide new information that could help guide efforts to manage reefs and help them survive. In particular, efforts that focus on protecting thermal refugia alone may become less effective as climate change progresses and refugia disappear. Instead, the authors note, multiple types of efforts will be needed to help coral adapt to higher temperatures and migrate to more favorable locations. 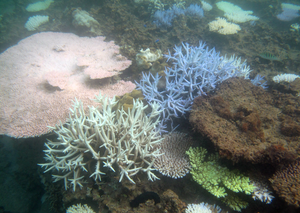