Tokyo, Japan – Researchers from Tokyo Metropolitan University have succeeded in using nanowires of a transition-metal chalcogenide to make atomically thin “nanoribbons”. Bundles of nanowires were exposed to a gas of chalcogen atoms and heat which helped merge the threads into narrow strips. Nanoribbons are highly sought after for sophisticated electronic devices; given the scalability of the method, the team hopes it will see widespread use in the industrial production of cutting-edge materials.

Materials science in the electronics age is as demanding as it is revolutionary. As circuitry get smaller, faster, and more energy efficient, scientists are faced with the increasingly difficult challenge of controlling the atomic-level structure of the materials that are used in them. One promising avenue of research is the use of intricate threads of material only a few atoms wide; one such structure is composed of transition-metal chalcogenides, a combination of transition metals and chalcogens, atoms which share a column with oxygen on the periodic table. These atomically thin “nanowires” possess properties unique to their one-dimensional structure and are highly sought after for sophisticated electronic devices. But what they have in minuteness, they lack in tunability. This is where “nanoribbons” come in, that is, narrow, atomically thin sheets. Fine control of their width, for example, leads to controlled variation in their electronic and magnetic properties.

A great deal of work has been applied to “build” nanoribbons from the bottom up. The problem, however, is that such methods aren’t very scalable. That’s a problem for producing bulk quantities for commercial devices.  Now, a team led by Dr. Hong En Lim and Associate Professor Yasumitsu Miyata from Tokyo Metropolitan University have come up with a scalable way of assembling nanowires into nanoribbons. The team had already pioneered ways to produce nanowires in bulk quantities. By taking some tungsten telluride nanowires, they created bundles of wires deposited on a flat substrate. These were exposed to vapors of different chalcogens like sulfur, selenium and tellurium. With a combination of heat and vapor, the initially separate threads in the bundles were successfully woven together into narrow, atomically thin “nanoribbons” with a characteristic zigzag structure. By tuning the thickness of the original bundles, they could even choose whether these ribbons were oriented parallel to the substrate or perpendicular to it, thanks to a competition between how favorable it is to have edges or faces parallel to the bottom surface. Furthermore, by tuning the substrate on which the bundles are placed, they could control whether the ribbons were randomly oriented or pointing in a single direction. Importantly, the method is scalable and may be applied to take the synthesis from lab-scale manufacture of a few ribbons to bulk syntheses over large substrate areas.

The team were able to confirm that the ribbons they created had the exotic electronic properties which are unique to their one-dimensional nature. Not only is this a big leap forward for materials science, but a tangible step towards seeing mass-produced nanoribbons in state-of-the-art electronics, optoelectronics, and catalysts. 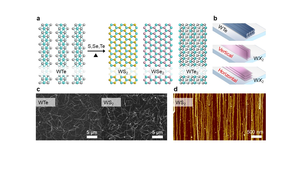 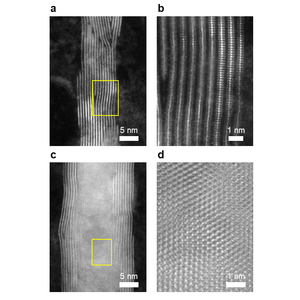