A new article published today in PLOS ONE by a Hebrew University of Jerusalem (HU)’s Institute of Archaeology team and colleagues focused on the remains of a previously submerged fisher-hunter-gatherer camp on the shores of the Sea of Galilee from around 23,000 years ago.  Through a close analysis of the abundance, variety and through use of animal remains, the team concluded that these survivors of the latest Ice Age thrived whereas most of their contemporaries, in other parts of the world, were nearly starved, due to the Earth’s extremely cold temperatures.

The Israeli site, known as Ohalo II, was occupied at the end of the last Ice Age (“Last Glacial Maximum”), between 23,500-22,500 years ago.  Ohalo II is known for the excellent preservation of its brush huts and botanical remains. The study, led by HU doctoral student Tikvah Steiner, under the supervision of HU Professor Rivka Rabinovich and University of Haifa archaeologist Prof. Dani Nadel who excavated the site, examined the diet and extensive use of animal parts to determine the welfare and lifestyle of these ancient inhabitants.

During the Last Glacial Maximum, ice sheets covered much of North America, Northern Europe, and Asia, profoundly affected Earth's climate by causing drought, desertification, and a large drop in sea levels.  Ironically enough, Ohalo II was discovered in 1989, following drought conditions that lowered the water level of the Sea of Galilee by several meters. Excavations were carried out between 1989-1991, and again between 1998-2001.  The site covers 2000 meters and is located near the southern tip of the modern Sea of Galilee, about 9 km south of Tiberias.  The site contains the remains of six oval-shaped brush huts, open-air hearths, the grave of an adult male, as well as various installations and refuse heaps. Abundant organic and inorganic materials provide a wealth of information about the lifestyle of fisher-hunter-gatherers during that period.

From a close analysis of 22,000 animal bones found at the site, including gazelles, deer, hares, and foxes, as well previous documentation regarding the number of charred plant remains, flint tools, cereal grains found there which signify a robust diet and lifestyle, the team concluded that Ohalo II presents a different picture of subsistence than most other early Epipaleolithic sites.

Climatic oscillations during the Last Glacial Maximum had minimal effects on the Upper Jordan Valley, specifically near Ohalo II, enabling those people to utilize a broad ecological niche comprised of varied edible plants, mammals, reptiles, birds, and fish. “Despite their ability to hunt large animals, these inhabitants also hunted a wide range of prey and had tools and time enough to fully exploit animal carcasses down to the marrow,” shared Steiner.  Likewise, “tortoises were seemingly selected for a specific body-size, which may suggest that their shells for use as bowls—and not their meat-- were the main target.  Hare and fox were possibly hunted for their pelts,” she added.

The current study focused on reptile, bird and mammal remains found in one of the huts during its three consecutive occupations.  As part of the study, identification and quantification was carried out of the different animal species, bone sizes were measured, and bone surfaces were subjected to spectroscopic examination to identify signs of cutting and wear. In addition, Dr. Rebecca Biton, a post-doctoral student at the Hebrew University and an expert in herpetology, discovered that the turtles were all of a uniform size, which might indicate a conscious selection by the hunters for a specific size of turtle shell.

Steiner and her colleagues believe that the findings from the site do not indicate a decline in the availability of food during this period but rather a rich diversity of food sources.  In this way, Ohalo II is a wonderful example of a true broad-spectrum economy during the latest Ice Age, at the very beginning of the Epipaleolithic period. 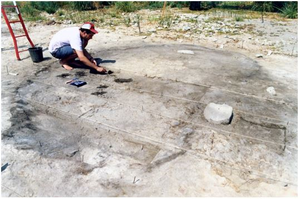