A research team led by scientists from City University of Hong Kong (CityU) has recently designed a structured thermal armour (STA) that achieves efficient liquid cooling even over 1,000°C, fundamentally solving a 266-year-old challenge presented by the Leidenfrost effect. This breakthrough can be applied in aero and space engines, as well as improve the safety and reliability of next-generation nuclear reactors.

The research has been led by Professor Wang Zuankai from CityU's Department of Mechanical Engineering (MNE), Professor David Quéré from the PSL Research University, France, and Professor Yu Jihong, Director of the International Center of Future Science, Jilin University and Senior Fellow of the Hong Kong Institute for Advanced Study at CityU.

The findings were published in the latest issue of the highly prestigious scientific journal Nature under the title "Inhibiting the Leidenfrost effect above 1,000 °C for sustained thermal cooling".

The Leidenfrost effect is a physical phenomenon discovered in 1756, which refers to the levitation of drops on a surface that is significantly hotter than the liquid's boiling point. It produces an insulating vapour layer and dramatically reduces heat transfer performances at high temperatures, which makes liquid cooling on the hot surface ineffective. This effect is most often detrimental and it has remained a historic challenge to suppress this effect.

The CityU-led team constructed a multitextured material with key elements that have contrasting thermal and geometrical properties. The rational design for the STA superimposes robust, conductive, protruding pillars that serve as thermal bridges for promoting heat transfer; an embedded thermally insulating membrane designed to suck and evaporate the liquid; and underground U-shaped channels that evacuate the vapour. It successfully inhibits the occurrence of the Leidenfrost effect up to 1,150 °C and achieves efficient and controllable cooling across the temperature range from 100°C to over 1,150°C.

"This multidisciplinary research project is truly a breakthrough in science and engineering, since it mixes surface science, hydro- and aero-dynamics, thermal cooling, material science, physics, energy and engineering. Searching for novel strategies to address the liquid cooling of high-temperature surfaces has been one of the holy grails in thermal engineering since 1756. We are fortunate to fundamentally suppress the occurrence of the Leidenfrost effect and thereby provide a paradigm shift in liquid thermal cooling at extremely high temperatures, a mission that has remained uncharted to date," said Professor Wang.

Professor Wang pointed out that current thermal cooling strategies under extremely high temperatures adopt air cooling measures rather than effective liquid cooling owing to the occurrence of the Leidenfrost effect, especially for applications in aero and space engines and next-generation nuclear reactors.

"The designed STA can be fabricated to be flexible, eliminating the need for additional manufacturing, especially for those surfaces that are hard to be textured directly. This is why the STA possesses huge potential for practical applications," added Professor Wang.

Professor Wang, Professor Quéré and Professor Yu are the corresponding authors of the paper. The first authors are Dr Jiang Mengnan and Dr Wang Yang from MNE.

Inhibiting the Leidenfrost effect above 1,000 °C for sustained thermal cooling 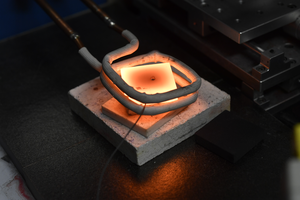 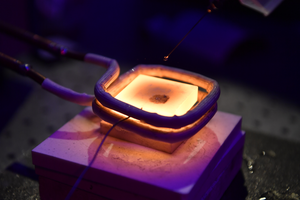 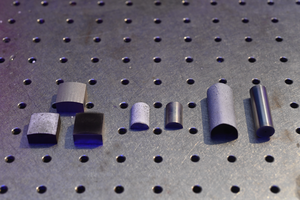 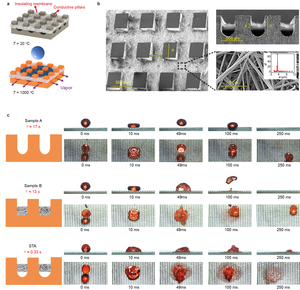 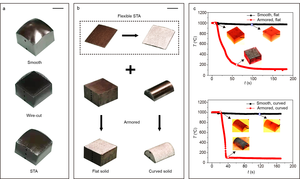