Researchers from HSE University have found that people from different cultures evaluate other people’s creativity differently. Russians tend to believe that the more unusual a drawing is, the more creative it is, while participants from the United Arab Emirates tend to believe just the opposite. The paper was published in Frontiers in Psychology.

In the first stage of the study, the researchers used the Thomas Ward’s Structured Imagination Test. The participants were students of HSE University and American University of Sharjah (UAE). The students were asked to imagine, draw and describe a creature living on another planet. This test was used to evaluate the respondents’ ability to think outside the box.

The images were analysed for three characteristics: bilateral symmetry, two eyes and four limbs. Alien creatures with all three properties resemble familiar depictions of humans and animals on Earth. However, an alien could be drawn without conforming to these rules.

Then, the drawings were evaluated by jury members from Russia and the UAE. The Russian jury included 53 students aged 17–20, while the UAE jury included the same number of participants aged 17–26. One hundred drawings were selected in equal numbers from both countries. The jury’s task was to evaluate the drawings’ creativity on a scale from 1 to 5.

The researchers supposed that representatives of different cultures would evaluate the drawings differently.

The Russian jury awarded points much more generously than their Emirati counterparts, regardless of the nationality of the author. Drawings by Russian students garnered 3.12 points from the Russian jury and 2.54 points from Emirati judges, compared to 2.33 and 1.94 points respectively for drawings by the UAE students.

Data analysis showed that the differences in scores were related to how familiar the aliens looked. In the first stage of the study, when drawing aliens, UAE students generally deviated from typical features less frequently than Russian students. This might be because Emirati students were less approving of a creative task that called for breaking the rules. The group from the UAE saw the more unusual drawings as less appealing and, therefore, evaluated them as less creative. The Russian participants, on the contrary, believed that the less an alien looked like a terrestrial animal or a human, the more creative the drawing.

‘People from different cultures evaluate creative work differently. Representatives of ‘western’ countries value innovation and originality in artwork, while people from ‘eastern’ cultures value aesthetics and authenticity of artwork. That’s why in western countries, violation of common standards are appreciated, whereas in eastern ones, they are viewed with disapproval,’ said Anatoly Kharkhurin.

But, despite all the cultural differences in the perception of creativity, both the Russian and the UAE juries evaluated the creativity of the drawings by Russian participants more highly. This may be related to the fact that the rules of aesthetics, unlike perceptions of creativity, are universal for different cultures, and both groups found the drawings by the Russian participants more aesthetically pleasing.

Cultural Variations in Evaluation of Creative Work: A Comparison of Russian and Emirati Samples 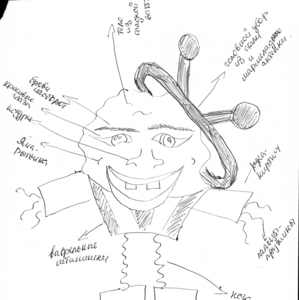 Image of an alien drawn by a student from Russia