Even at high concentrations, antibiotics won’t kill all bacteria. There are always a few survivors, even in a bacterial population that is genetically identical. Scientists at the KU Leuven (Belgium) and the University of Groningen (the Netherlands) discovered that these survivors share a common feature: they accumulate acid in their cells, which shuts down their protein synthesis. These results could lead to improved antimicrobial treatments, and were published in Nature Communications on 27 January.

Bacteria and other micro-organisms can become resistant to antimicrobials, which is a growing problem in medicine. Although new antimicrobial drugs are one solution, we can also help prevent resistance developing by adopting better treatment regimens using existing antimicrobials. But the very first step in the development of resistance is not very well understood, explains Bram Van den Bergh, postdoc at the Center for Microbiology at VIB - KU Leuven (Belgium): ‘Cells have to survive an initial antibiotic treatment before they become resistant to future treatments. I wanted to understand why these cells survive.’

In previous work, Van den Bergh noted that in clonal cultures of bacteria (where all cells are genetically identical), there are always a few cells that survive a treatment with antibiotics. ‘Maybe one in a thousand cells, or even only one in a hundred thousand, will survive. We cultured these survivors and treated them again, to evolve bacteria in the lab that are more antibiotic-tolerant.’ After only a few days of this directed evolution via treatment and recovery, already up to 50% of all cells  would survive the antibiotics.

In the current work, genetic analysis showed that these survivors share mutations in one crucial cellular system: Respiratory Complex I. This is a vital part in the machinery that drives energy production  in bacteria and beyond. Specifically, the mutations blocked the ability of this complex to pump protons out of the cells. This can lead to serious heartburn, as the cells can’t get rid of accumulating acid.

‘We wondered how this could lead to increased survival’, explains Van den Bergh. The solution started partially by chance during a meeting at a conference in Switzerland between his supervisor Jan Michiels and Matthias Heinemann, a specialist in cell metabolism and professor of molecular systems biology at the University of Groningen. Michiels gave a talk on cellular acidification, Heinemann presented data that showed that a problem in metabolism can lead to tolerance against antibiotics. The two scientists concluded they were studying the same phenomenon but from different perspectives.

This was in 2018 and it took a lot of lab work from several researchers to connect their observations and determine how cells escape the lethal effects of antibiotics. Heinemann: ‘Any metabolic disturbance will lead to increased acidity inside the cells. When the Respiratory Complex I can’t pump the protons out, the acidity will continue to increase. Eventually, this leads to a full shutdown of all protein-based processes and of the synthesis of new proteins. This renders the used antibiotics useless, as their mechanism of action is interference with protein synthesis.’

This is how the hyper tolerant mutants evolved in the lab survived treatment. Once the antibiotics were removed and the metabolic problem was restored, acidity was reduced and the cells rebooted. Van den Bergh: ‘We didn’t explore how they then acquire resistance, but there are different pathways that may lead to this, like an increase in mutation rate caused by stress, or simply a numbers game: more cells survive and the needed treatment time prolongs, so the chances increases that one of these cells picks up resistance.’ The discovery could help fight antibiotic resistance, for example, by adding existing drugs that reduce acidity in cells.

Heinemann and Van den Bergh believe there is still more to discover about these tolerance mechanisms. Van den Bergh: ‘We have evolved many other hyper tolerant mutants with different mutations, most of them in transport systems for ions or charged molecules. I would like to find out more about those and how the transport and balance of ions affect antibiotic tolerance’

The research for the Nature Communications paper was mainly done at the KU Leuven and University of Groningen, with contributions from scientists at the Albert-Ludwigs-University of Freiburg, Germany and the Proteomics Core Facility, University of Basel, Switzerland. 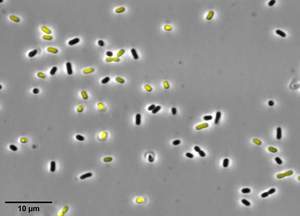 Picture of acid buildup in cells 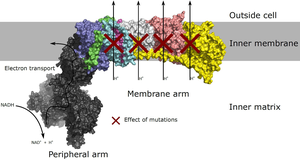 Structure of Respiratory Complex I