As humans fill the atmosphere with excess carbon dioxide, much of it gets absorbed by the oceans, acidifying them—a potential concern for marine life. According to a new study publishing February 3rd in PLOS Biology, however, previously high-profile worries about an effect on fish behaviour appear to have declined.

The research led by Jeff Clements and Fredrik Jutfelt at the Norwegian University of Science and Technology, along with Josefin Sundin (Swedish University of Agricultural Sciences) and Timothy Clark (Deakin University), demonstrates that the apparent severity of ocean acidification impacts on fish behaviour, as reported in the scientific literature, has declined dramatically over the past decade.

The researchers used meta-analysis to analyse trends in reported effects of ocean acidification on fish behaviour in studies published from 2009-2019. While early studies reported extremely clear and strong effects, the magnitude of those impacts has decreased over time and have been negligible for the past five years.

“A textbook example of the decline effect”, explains Dr. Clements, lead author of the study. “The decline effect is the tendency for the strength of scientific findings to decrease in magnitude over time. While relatively well-recognized in fields like psychology and medicine, it is lesser known in ecology—our study provides perhaps the most striking example of it in this field to date.”

“Science often suffers from publication bias, where strong effects are selectively published by authors and prestigious journals”, says co-author Prof. Jutfelt. “It’s only after others try to replicate initial results and publish less-striking findings that true effects become known. Our analysis shows that strong effects in this field are favorably published in high impact journals.”

Alongside publication bias, studies that reported severe effects tended to have smaller sample sizes. Not only that, but these less rigorous studies in prestigious journals still receive more attention from researchers and have had a stronger influence on perceived effects in this field.

While imploring others to give more emphasis to recent studies with larger sample sizes, Clements feels that the team’s results are good news. “While climate change will undoubtedly affect marine animals, at least it seems that ocean acidification won’t directly affect fish behaviour.” The decline is also testament to the self-correcting nature of the scientific process.

Jutfelt, Sundin, and Clark agree. “Carbon dioxide emissions have severe negative impacts, not the least through global warming. Given the results of our study, future research efforts can focus on questions where we do see substantial effects being repeated over time,” says Sundin.

“We demonstrate a strong "decline effect" in ocean acidification impacts on fish behaviour - one of the most striking examples of this phenomenon in the field of ecology to date,” adds Clements.

In your coverage, please use this URL to provide access to the freely available paper in PLOS Biology:   http://journals.plos.org/plosbiology/article?id=10.1371/journal.pbio.3001511

Funding: This work was supported by a Marie Skłodowska-Curie Individual Fellowship funded through the European Union Horizon 2020 program (project number 752813 to J.C.C.), the Australian Research Council’s Future Fellowship program (FT180100154 to T.D.C.), and the Research Council of Norway (262942 to F.J.). The funders had no role in study design, data collection and analysis, decision to publish, or preparation of the manuscript.

Competing interests: Three of the authors (J. Sundin, T. Clark, and F. Jutfelt) have previously raised concerns about, and have requested formal investigations into, the scientific integrity of some studies published by Drs. Philip Munday and Danielle Dixson. 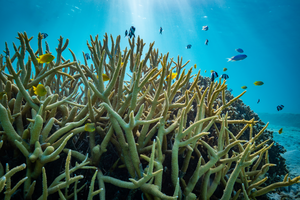