A new study has revealed that the rich native tree diversity in South and Southeast Asia is at risk of potential extinction. The region-wide and spatially explicit threat assessment focused on 63 socio-economically important native trees in Asia, showing that all species are highly vulnerable to at least one of the common threats in the region’s landscapes, namely habitat conversion, overexploitation, overgrazing, fire, and climate change. These forest landscapes, which are critical in sustaining diverse ecosystem services for hundreds of millions of people, urgently require coordinated and targeted conservation and restoration initiatives to prevent further destruction and biodiversity loss that undermines ecosystem functioning.

On average, only 10% of the studied species’ ranges were readily suitable for conservation, characterized by limited exposure to the studied threats. Alarmingly, 75% of these areas fall outside of existing protected areas. Northern Tenasserim rainforests in Myanmar and lowland and montane rain forests in Borneo emerged as hotspots for expanding conservation actions that would benefit a large number of native tree species. At the same time, 40% of the species combined ranges are priority for restoration.

Identifying climate-sensitive and population-specific conservation and restoration priorities for the affected forests is crucial for many Asian countries as extreme species diversity coincides with high human population densities and socio-economic development needs. “Understanding the species’ distributions and threats helps policymakers and land managers plan effective and cost-efficient conservation and sustainable use strategies for the species across their ranges, including outside protected areas”, says Dr. Riina Jalonen, Scientist at the Alliance of Bioversity International and CIAT (the Alliance), who coordinated the study.

The 63 species, selected for their socio-economic importance across 20 countries, were identified by experts of the Asia Pacific Forest Genetic Resources Programme (APFORGEN). The trees occur across a wide variety of habitats, with diverse traits and uses, from timber to commercially and locally important non-timber forest products, as well as those valued for the provision of ecosystem services including erosion control, soil improvement, and shade.

Context-specific approach towards conservation and restoration

“This kind of spatial analysis is an ideal complement to field studies to target conservation and restoration areas with optimized benefits,” says Hannes Gaisberger, Associate Scientist at the Alliance. “The results will help decision-makers, forest managers, and conservation practitioners target financial and human resources to where the biggest impacts can be achieved.”

“With the data from this project, we can now predict where potential habitats for the different species are and have the data to go to our top management and show that that they need to urgently be conserved,” confirms project partner, Vilma Bodos, Forest Department Sarawak, Malaysia.

Species highly threatened across their ranges include Makha or Beng tree (Afzelia xylocarpa), threatened mainly by climate change; Temak (Shorea roxburghii), and Black Rosewood (Dalbergia oliveri), which are most threatened by habitat conversion; as well as Wild Nutmeg (Myristica malabarica) and Agar Wood (Aquilaria crassna), at most threat from overexploitation. All these species are rarely cultivated, meaning that the remaining at-risk natural populations are typically the only sources of their valuable products - and of seeds and seedlings needed for restoration and planting programmes.

Indonesia, home to 33 of the studied trees, is a hotspot for on-site conservation while India tallies the highest proportion of key areas for restoration. Meanwhile, countries prioritized for off-site conservation as a result of high climate-related threats include Indonesia, India, Thailand, and Myanmar.

Applications of the study findings

While the study covers only a fraction of the total tree diversity of this region, “it is important because it shows that current protected areas networks across the Asia-Pacific do not capture the genetic resources of ecologically and economically important tree species that are critical for restoration,” says Chris Kettle, Principal Scientist and Global program leader on Tree Biodiversity at the Alliance.

In the region’s mega-diverse countries, the combined multi-species maps help identify target areas where conservation and restoration actions generate most synergies between species and, thus, optimize the use of land and resources. The maps also allow identifying synergies between countries in conserving the species’ genetic resources the foundation of climate-resilient seed sources for forest and landscape restoration programmes.

Given the high species diversity, the work to protect forest landscapes has only begun. The Alliance is currently working with national partners in Cambodia, Lao PDR, and Vietnam to plan detailed conservation actions for the endangered and highly valuable Rosewoods (Dalbergia spp.) by building on the same methodology as in the present study.

“For nearly 13% of the selected target species, there was not enough data available about their known occurrences for us to carry out species distribution modeling. This just goes to show that the work has only started. We hope that this initiative inspires forest managers, researchers, conservation and restoration practices across the region to continue the work and to work in an increasingly coordinated way,” Jalonen concludes.

Read the paper in Conservation Biology:

The study is based on the results of the initiative “APFORGIS - Establishing an Information System to Conserve Native Tree Species and Their Genetic Resources in the Asia-Pacific”. The initiative was implemented in collaboration with over 60 experts and 11 partner institutions across Asia. It was funded by the Government of Germany through the Federal Ministry for Agriculture and Food, and the CGIAR Research Program on Forests, Trees and Agroforestry. 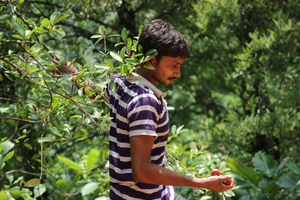