A method of producing vital chemical building blocks for use in the pharmaceutical and agrochemical industries that mimics how plants manufacture them has been developed by University of Warwick scientists.

Using enzymes in the same way that plants do, the scientists have created bacteria that ‘digest’ molecules to synthesise new compounds in a process that is reusable and produces minimal waste products. Their results are published in a new study in the journal ACS Catalysis and could help the pharmaceutical and agrochemical industries in making their manufacturing process more environmentally friendly.

The scientists were particularly interested in reproducing a process in plants called the indole-3-acetamide (IAM) pathway, that allows the plant to produce compounds such as indolic amides, carboxylic acids and auxins. These compounds have a number of agrochemical and pharmaceutical applications but are difficult for industry to manufacture except by using chemical catalysts, which produce a lot of toxic chemical waste.

While scientists have been aware of how nature produces these molecules for decades, until now the technology did not exist that could take advantage of it. Now for the first time, a team based at the Warwick Integrative Synthetic Biology Centre has developed a process that uses enzymes in a series of cascade reactions to break down molecules and synthesise them into the required compounds, in the same way a plant would.

The study, funded by UK Research and Innovation and the Royal Society, was led by Dr Binuraj Menon at the University of Warwick School of Life Sciences, now based at the University of Portsmouth. He said: “We knew that multiple pathways to Auxin molecules exist in plants. Also, some plant pathogenic bacteria utilize these routes to infect and grow in plant roots and galls. However, reconstructing it in an industrial and friendly microbial host always we have encountered several functional issues.

“By engineering these enzymes, we can adapt the process for the purpose of large-scale production, making it easily accessible, purifiable and compatible. The advantage here is the applicability of these enzymes, as the existing enzymatic solutions to make amide and carboxylic acid are challenging, time consuming and require many expensive components

Enzymes serve a variety of purposes in living organisms and are often best known for forming part of the human digestive system by breaking down food. They are involved in many other functions as biocatalysts, in accelerating chemical reactions. Enzymes are being investigated as alternatives to current chemical methods, cutting industrial emissions and resources, an ideal solution for moving towards greener and environmentally friendly industrial production.

To produce the enzymes for this study, the scientists used non-pathogenic bacteria that were engineered to overexpress them. These enzymes can be separated for reactions in mild and aqueous conditions or the bacteria can be directly used for reactions.

The bacterial cells reproduce quickly and chemicals are produced from cheaper components like glucose, making it easily scaled up and reused with little waste or environmental impact as is often encountered in chemical catalysts. By redesigning microbes and enzymes, they can be engineered to have new abilities and applications.

Dr Menon added: “We are basically harnessing the power of nature to solve many problems in the chemical, pharmaceutical, agriculture and manufacturing industries via engineering microbes and enzymes. Synthetic Biology is essentially using biology for synthetic purposes, and here we have displayed how blending and mixing it with different enzymes can be used with many similar molecules.

“In the near future, additional engineering and lab-based evolution of these enzymes will allow us to prepare bespoke molecules and targeted chemicals. The engineered bacteria could also be used to coat seeds for healthy germination and root development, or as a weed killer by tuning the auxins, with many direct applications and possibilities.”

Caption: The auxins used in this process are the same that cause the formation of crown galls (pictured) in certain plants.

‘Versatile and Facile One-Pot Biosynthesis for Amides and Carboxylic Acids in E. coli by Engineering Auxin Pathways of Plant Microbiomes’ 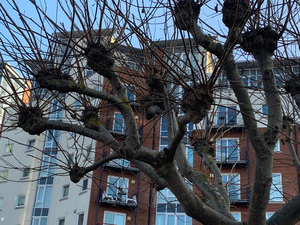 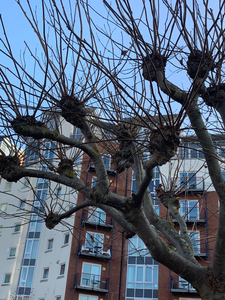