Astronauts in orbit could soon be using robots to explore lunar or planetary surfaces without having to expose themselves to the dangers of the extraterrestrial environment. A paper by Kjetil Wormnes and his colleagues based at the European Space Agency (ESA), Noordwijk, The Netherlands, published in the De Gruyter journal Open Astronomy, presents a simulated geological exploration mission in which, for the first time, astronauts in the International Space Station obtained direct haptic feedback from robots that they control on the ground, “feeling” objects that they manipulate.

Human interplanetary exploration is inspirational but it is still, largely, the stuff of science fiction; it is almost 50 years since somebody last set foot on the Moon, and crewed expeditions beyond our satellite are still decades away.

During the last half-century, however, many missions have taken robots to planetary surfaces, and they can operate in conditions that are far too hostile for human astronauts, but they need direct human control if they are to undertake complex missions.

The ANALOG-1 mission, described in this paper, is the culmination of 11 separate experiments carried out by the ESA over a decade under the METERON banner.  Each of these addressed a different aspect of the remote operation of a robot explorer, and ANALOG-1 represents a test of the complete system.

This mission involved an astronaut, Luca Parmitano, orbiting the earth on the International Space Station and controlling a robot roving around an artificial lunar landscape that had been set up in an old aircraft hanger at the ESA’s technology centre in the Netherlands. The robot’s task was to select, investigate and store rock samples.

The experiments proved that Parmitano could control the robot’s arm as it moved through three translational and three rotational degrees of freedom, and that the forces it ‘felt’ were transmitted back to him.  Through haptic feedback, the weightless astronaut was able to sense the weight of rock samples on the ground as the robot picked them up and manipulated them.

The ESA and its American counterpart are both planning future missions to the Moon. “This combination of a robust robot explorer on the lunar surface and a highly trained astronaut operator in the relative safety of orbit will allow more difficult and complex investigations of that surface than are currently possible,” says Wormnes. “It is possible that this could, one day, even pave the way to establishing and sustaining a human presence on the Moon.”

The authors state no conflict of interest. 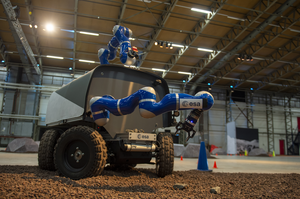 Close-up of the ANALOG-1 robot rover