AMHERST, Mass. – A team of researchers at the University of Massachusetts Amherst recently announced that they have discovered the genetic linkages governing the formation of flowers. The revelation solves a long-standing mystery—how are there so many different types of flowers in the world?—and shines a bright light into a dark corner of evolution. The research also demonstrates the power of a technique called “forward genetics” in uncovering the mysteries of nature.

“Flowers are amazing,” says Madelaine Bartlett, professor of biology at UMass Amherst and senior author of the paper, recently published in the Proceedings of the National Academy of Sciences. “They’re all built of the same component parts, and yet we have such incredible diversity, from corn tassels to orchids. We want to know how the same few parts wind up creating such wildly different forms.”

It has long been known that a process called “programmed cell death” is partly responsible for flowers’ morphological diversity. Programmed cell death is a genetic mechanism that eliminates some cells on purpose—it’s why humans don’t have webbed fingers—and it is at work in the carpels of flowers, or the seed-bearing structures at the heart of the flower. Enormous floral variety is governed by which parts of the flower’s growth are suppressed, and one gene in particular, known as GRASSY TILLERS1 (GT1), influences carpel growth suppression in maize. But it’s not the only gene regulating the process, and until now, no one has been able to identify others that interact with GT1 to suppress maize carpels.

Focusing on maize flowers—think of an ear of corn or branched tassel at the top of a maize plant—the team, led by Harry Klein, who completed this research as part of his Ph.D. in plant biology at UMass Amherst and now at the Dana-Farber Cancer Institute, designed an innovative experiment to identify other genes regulating carpel suppression with GT1. At the heart of their experiment is a technique known as an “forward genetics,” which is a way of working backwards from a known flower formation, or phenotype—in this case, a mutated maize flower caused by a genetic alteration in the cell death process—to the specific mutation causing that mutant formation.

Finding the specific genes that govern any individual trait is like “finding a needle in a haystack,” according to Bartlett, and so Klein performed a series of genomic analyses with the complex maize genome. The result was that Klein and his coauthors discovered that another gene, RAMOSA3 (RA3), also plays a vital role in maize carpel programmed cell death. This surprised Klein and his colleagues, because RA3 was previously thought to play a role only in the way that plants branch. But it turns out that RA3 is pleiotropic, meaning that it influences more than one trait.

Not only does the team’s discovery tell us more about the evolution of life on earth, it has implications for the applied science of plant breeding, since flowers give humans everything from apples to nuts to the corn-on-the cob that has become a summertime staple in much of the US.

This research was supported by the National Science Foundation, USDA National Institute of Food and Agriculture, the University of Massachusetts, the Max Planck Society, the Lotta M. Crabtree Foundation, and UMass Amherst’s Institute for Applied Life Sciences (IALS), which combines deep and interdisciplinary expertise from 29 departments on the UMass Amherst campus to translate fundamental research into innovations that benefit human health and well-being.

The genetics of flower power: Hidden link between genes and flower formation revealed 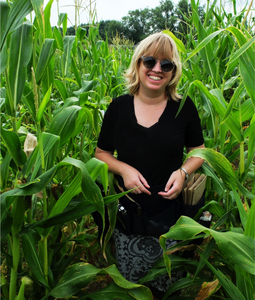 Madelaine Bartlett in the maize field. 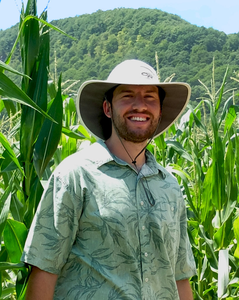 Harry Klein in the maize field.