Phytophthora stem and root rot results in approximately $50 million in annual losses for Canadian soybean production and is especially devastating because it can attack soybean plants at all growth stages. To combat this disease, growers turn to soybeans with resistance genes known as Rps. However, the large-scale deployment of Rps genes has led to the rapid evolution of the causal pathogen, Phytophthora sojae, which undermines the efficacy of Rps.

To help soybean production, plant pathologists must determine the pathotypes of P. sojae isolates, which has typically been a fastidious process requiring a specific expertise. In a recent study, however, scientists developed a molecular assay to accurately and quickly assess the pathotypes of isolates obtained from the provinces of Quebec, Ontario, and Manitoba. They published their results in Plant Disease.

Their results found 24 different pathotypes in Quebec and Ontario compared to only eight in Manitoba, where soybean culture is more recent. They also found that more than 85 percent of fields surveyed contained isolates that were able to overcome the Rps genes present in the planted varieties, signifying that most growers used a variety not resistant to isolates found in their fields.

“Our study should alert plant breeders to the need to develop new soybean varieties that exploit less commonly used Rps genes and that efforts should be focused on the discovery or exploitation of new Rps genes,” added Bélanger.

Bélanger and colleagues also found that many soybean growers were not properly informed about Rps genes and how the right selection could easily reduce losses related to the pathogen. 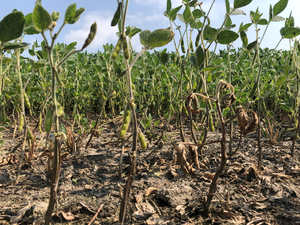