In early December 2021, the project "Development of a laser system for experiments with Bose-Einstein condensates on the International Space Station within the BECCAL payload (BECCAL-II)" commenced, with the involvement of a team of researchers led by Professor Patrick Windpassinger and Dr. André Wenzlawski from Johannes Gutenberg University Mainz (JGU). In collaboration with Humboldt-Universität zu Berlin, the Ferdinand-Braun-Institut (FBH) and Universität Hamburg, the researchers will develop a laser system for the BECCAL experiment to study ultracold atoms on board the International Space Station (ISS).

The BECCAL experiment is a multi-user platform that will be open to numerous national and international scientists to test their ideas in practice. The platform will enable them to conduct a wide range of experiments in fields such as quantum sensing, quantum information, and quantum optics.

Transport of the BECCAL payload to ISS scheduled for early 2026

The ISS offers a unique combination of weightlessness, accessibility, and a large number of experiments. This will make it possible, among other things, to carry out high-precision experiments such as testing Einstein’s equivalence principle. "Ideally, the experiments require the ultracold atom cloud to be completely free of any forces. Weightlessness permits such conditions," said Dr. André Wenzlawski from the Windpassinger group at Mainz University.

The BECCAL experiment is a successor to the CAL project, which has conducted numerous experiments aboard the ISS since 2018. BECCAL is intended to enhance the experimental capabilities on board the ISS, especially in the fields of precision atomic interferometry and the manipulation of atoms with detuned optical fields. An additional improvement of the overall performance is being sought by the implementation of new technological approaches to preparing atomic ensembles. The payload is scheduled for launch in early 2026 and will directly replace the CAL apparatus in the ISS Destiny module.

In the subproject, which is funded with EUR 3.4 million, the group led by Professor Patrick Windpassinger from the Institute of Physics at JGU will work together with Universität Hamburg to develop and realize a Zerodur-based optical splitting and switching system and implement it into the BECCAL payload. These developments will draw on the findings of numerous previous experiments conducted in microgravity conditions, such as MAIUS, QUANTUS, and KALEXUS, in all of which JGU participated. "These experiments have allowed us to lay the technological foundations for running such an extremely complex experiment as well as to perform initial fundamental tests on the feasibility of the envisaged experiments," said Wenzlawski.

The robust laser modules necessary for the experiment are being supplied by the FBH, which is currently manufacturing 55 of the narrow-band laser sources. Humboldt-Universität zu Berlin is coordinating the integration of these laser modules along with the optical beam splitting and switching benches into a compact overall system. The project is being financed by the German Space Agency of the German Aerospace Center (DLR) with funding from the German Federal Ministry for Economic Affairs and Climate Action, following a resolution by the German Bundestag. 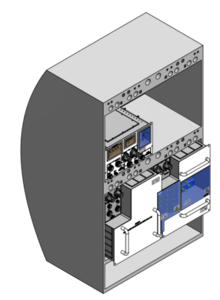