For centuries, armies in the field have faced situations where they had to live off whatever they could get their hands on. The saying “an army marches on its stomach” has been attributed to both Napoleon and Frederick the Great.

In the 21st century, the U.S. Defense Advanced Research Projects Agency – DARPA – has enlisted Idaho National Laboratory to help create a mechanical system that soldiers can use to separate their garbage and turn it into everything they need to survive: food and water for their bodies, fuel and lubricants for their vehicles.

ReSource, a program started in 2019 under DARPA’s Biological Technologies Office, aims to revolutionize how critical supplies are procured. “In a remote or austere environment, where even the basics for survival can’t be taken for granted, there can be no such thing as ‘single use,’” Program Manager Blake Bextine said at the time the program was announced.

Before anything can be done with garbage, however, it must be cleaned and sorted, with organic material separated from the inorganic. DARPA has turned to INL to solve this important step of the process.

“DARPA came to us for a feedstock supply system for the front end,” said Jeff Lacey, the INL senior staff scientist who is the project’s principal investigator. “It has to be something that can identify and sort whatever you might find in the garbage can, including plastics, paper and food waste.”

Because the system is intended for use in remote locations, it needs to be portable. Lacey and his team are close to unveiling a waste cleaning and sorting unit that can be transported on the bed of a Humvee.

Right now, troops in the field either cart their trash out or burn it, depending on security and environmental factors. This is a lot of work and takes a special toll on missions that are already logistically strained.

“Trucking garbage off base, there is a lot of good material and good energy in it,” Lacey said. “By having a system that can make use of it, there is a longer time between supply runs. This is a real advantage in a hostile environment.”

The other scenario in which troops would benefit is disaster recovery efforts. The system could provide important assistance in places like Puerto Rico, which was devastated by Hurricane Maria in 2017. “In an area where there’s been a hurricane, tsunami or other destructive event, there’s garbage everywhere and nothing useful,” Lacey said. “This will convert it into things that are needed.”

The main challenge Lacey and his team have faced is creating a sorting technology that identifies different kinds of waste. Although municipal solid waste has been recognized for decades as a potentially plentiful source of low-cost feedstock, no machine has been developed that can sort food waste materials like cardboard, Styrofoam and plastic packaging.

HOW DOES MACHINE LEARNING SOLVE A BIG PIZZA PROBLEM?

To address this, INL researchers Lorenzo Vega and Blesson Isaac have used high-powered computing and machine learning to develop an automated spectroscopy model that can digitally identify and characterize both the organic and inorganic materials in a waste stream as it is being processed. Recycling pizza boxes is a good example of this. The pizza box itself can be recycled but not after it has been contaminated with grease.

As the material is sorted, it goes into a pretreatment and decontamination system using dimethyl ether as the starting solvent for the extraction of adhesives, food residue and oils. A widely used organic solvent, DME exists as a gas at atmospheric pressure but can be compressed into a liquid that removes oils, organics and water while leaving the materials for conversion.

So far, the solvent decontamination team of Aaron Wilson, Hyeonseok Lee and Chris Orme, has scaled this system to the point where it can circulate 10 liters of DME. Phase II of the project will involve integrating the sorting and decontamination systems.

A successful ReSource system will be able to sort separate garbage and break the components down so that high-carbon polymers found in common plastics can be turned into fuel and lubricants. For food, ReSource would most likely yield a basic product composed of macronutrients ready for immediate consumption. It’s not ribeye steak, but it is something with enough calories to keep people alive in an emergency.

The feedstock doesn’t have to be limited to trash. A bundle of tree branches might not be immediately edible, but a ReSource apparatus might be able to extract the nutrients and liquids to create something edible for troops to consume.

While the immediate focus is on a system that can fit onto a Humvee, there are parallel plans underway to develop a unit the size of a shipping container to support larger disaster recovery operations. Ideally, the equipment will be simple enough for GIs to feed waste in and take supplies out.

Working on a project for DARPA is always an adventure, Lacey said. They expect challenges to be addressed quickly. If the original hypothesis doesn’t pan out, researchers are given the opportunity to propose an alternative pathway and redirect their efforts.

“This first version of our system needs to be completed within 15 months, so we have to work and innovate quickly,” he said. “They expect you to stretch yourself to see what you can accomplish.”

About Idaho National Laboratory
Battelle Energy Alliance manages INL for the U.S. Department of Energy’s Office of Nuclear Energy. INL is the nation’s center for nuclear energy research and development, and also performs research in each of DOE’s strategic goal areas: energy, national security, science and the environment. For more information, visit www.inl.gov. Follow us on social media: Twitter, Facebook, Instagram and LinkedIn. 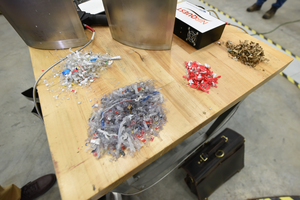