HANOVER, N.H. – February 7, 2022 – The first atlas to measure the movement and thickness of the world’s glaciers gives a clearer, but mixed picture of the globe’s ice-bound freshwater resources, according to researchers from the Institute of Environmental Geosciences (IGE) and Dartmouth College.

The worldwide survey, published in Nature Geoscience, measures the velocity and depth of more than 250,000 mountain glaciers. The research revises earlier estimates of glacial ice volume, now suggesting that there is 20% less ice available for sea level rise in the world’s glaciers than previously thought.

The results have implications on the availability of water for drinking, power generation, agriculture and other uses worldwide. The findings also change projections for climate-driven sea level rise expected to affect populations around the globe.

“Finding how much ice is stored in glaciers is a key step to anticipate the effects of climate change on society,” said Romain Millan, a postdoctoral scholar at IGE and lead author of the study. “With this information, we will be closer to knowing the size of the biggest glacial water reservoirs and also to consider how to respond to a world with less glaciers.”

“The finding of less ice is important and will have implications for millions of people around the world,” said Mathieu Morlighem, the Evans Family Professor of Earth Sciences at Dartmouth and co-author of the study. “Even with this research, however, we still don’t have a perfect picture of how much water is really locked away in these glaciers”

The new atlas covers 98% of the world’s glaciers. According to the study, many of these glaciers are shallower than estimated in prior research. Double counting of glaciers along the peripheries of Greenland and Antarctica also clouded previous data sets.

The study found less ice in some regions and more ice in others, with the overall result that there is less glacial ice worldwide than previously thought.

The research found that there is nearly a quarter less glacial ice in South America’s tropical Andes mountains. The finding means that there is up to 23% less freshwater stored in an area from which millions of people depend during their everyday lives. The reduction of this amount of freshwater is the equivalent of the complete drying of Mono Lake, California’s third largest lake.

On the contrary, Asia’s Himalayan mountains were found to have over one-third more ice than previous estimates. The result suggests that about 37% more water resources could be available in the region, although the continent’s glaciers are melting quickly.

“The overall trend of warming and mass loss remains unchanged. This study provides the necessary picture for models to offer more reliable projections of how much time these glaciers have left,” said Morlighem.

The melting of glaciers due to climate change is one of the main causes of rising sea levels. It is currently estimated that glaciers contribute 25-30% to overall sea level rise, threatening about 10% of the world's population living lower than 30 feet above sea level.

“Comparing global differences with previous estimates is just one side of the picture,” said Millan. “If you start looking locally, then the changes are even larger. To correctly project the future evolution of glaciers, capturing fine details is much more important than just the total volume.”

According to the study, depth measurements previously existed for only about 1% of the world’s glaciers, with most of those glaciers only being partially studied.

The glacial ice estimates that did exist prior to the new study were almost entirely uncertain, according to the research team. The uncertainty is due, in part, to the lack of ice flow measurements showing the location of thick and thin ice, all of which is gathered through indirect techniques.

To create the massive ice flow database, the research team studied more than 800,000 pairs of satellite images of glaciers, including large ice caps, narrow alpine glaciers, slow valley glaciers and fast tidewater glaciers. The high-resolution images were acquired between 2017-18 by NASA’s Landsat-8 and the European Space Agency’s Sentinel-1 and Sentinel-2 satellites. The data was processed using more than 1 million hours of computation at IGE.

“We generally think about glaciers as solid ice that may melt in the summer, but ice actually flows like thick syrup under its own weight,” said Morlighem. “The ice flows from high altitude to lower elevations where it eventually turns to water. Using satellite imagery, we are able to track the motion of these glaciers from space at the global scale and, from there, deduce the amount of ice all around the world.”

The resulting first global map of flow velocities covers most of the world’s terrestrial glaciers, including regions where no previous mapping existed, such as the southern cordilleras of South America, sub-Antarctic islands, and New Zealand.

Although the new atlas marks a major improvement in glacier ice and water potential estimates, the thickness distribution of the world's glaciers is still subject to large gaps of information.

"Our estimations are closer, but still uncertain, particularly in regions where many people rely on glaciers,” said Millan. “Collecting and sharing measurements is complicated, because glaciers are spread throughout so many countries with different research priorities.”

According to the team, without direct field measurements, the estimate of glacier freshwater resources will remain uncertain.

The study calls for a re-evaluation of the evolution of the world’s glaciers in numerical models as well as direct observations of ice thicknesses in the tropical Andes and the Himalayas, which are major water towers but that remain poorly documented.

Jérémie Mouginot and Antoine Rabatel, of the Institute of Environmental Geosciences (IGE) – Grenoble Alpes University, the French National Center for Scientific Research (CNRS), the French National Research Institute for Sustainable Development (IRD) and Grenoble INP Graduate Schools of Engineering and Management, made significant contributions to the study. Millan and Morlighem conducted part of the research at the University of California Irvine. Millan is also affiliated with CNRS and the Department of Geosciences and Natural Resources Management of the University of Copenhagen. Research was supported by France’s National Center for Space Studies (CNES).

About Dartmouth
Founded in 1769, Dartmouth is a member of the Ivy League and consistently ranks among the world’s greatest academic institutions. Dartmouth has forged a singular identity for combining its deep commitment to outstanding undergraduate liberal arts and graduate education with distinguished research and scholarship in the Arts and Sciences and its four leading graduate schools—the Geisel School of Medicine, the Guarini School of Graduate and Advanced Studies, Thayer School of Engineering, and the Tuck School of Business.

About the Institute of Environmental Geosciences (IGE)
The Institute of Environmental Geosciences (IGE) is a joint research unit (CNRS, IRD, UGA, Grenoble INP) that brings together about 250 people. IGE is part of the Observatoire des Sciences de l’Univers de Grenoble (OSUG). IGE’s projects are focused on the study of climate and the anthropization of our planet, particularly in regions where societal and environmental issues are the most significant: the polar regions, the intertropical zone, and mountain regions.

Ice velocity and thickness of the world’s glaciers 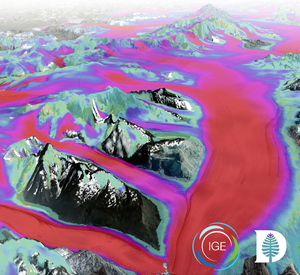 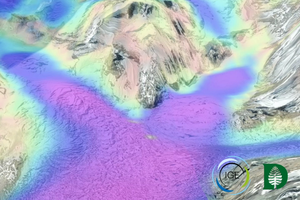 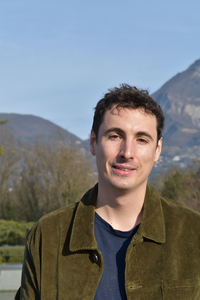 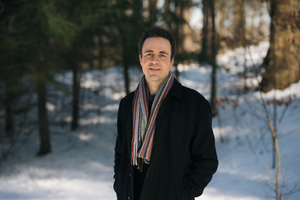