Stretching up to 150 light years long, the one-dimensional strands (or filaments) are found in pairs and clusters, often stacked equally spaced, side by side like strings on a harp. Using observations at radio wavelengths, Northwestern University’s Farhad Yusef-Zadeh discovered the highly organized, magnetic filaments in the early 1980s. The mystifying filaments, he found, comprise cosmic ray electrons gyrating the magnetic field at close to the speed of light. But their origin has remained an unsolved mystery ever since.

Now, the new image has exposed 10 times more filaments than previously discovered, enabling Yusef-Zadeh and his team to conduct statistical studies across a broad population of filaments for the first time. This information potentially could help them finally unravel the long-standing mystery.

The study was published online today by The Astrophysical Journal Letters.

“We have studied individual filaments for a long time with a myopic view,” said Yusef-Zadeh, the paper’s lead author. “Now, we finally see the big picture — a panoramic view filled with an abundance of filaments. Just examining a few filaments makes it difficult to draw any real conclusion about what they are and where they came from. This is a watershed in furthering our understanding of these structures.”

Yusef-Zadeh is a professor of physics and astronomy at Northwestern’s Weinberg College of Arts and Sciences and a member of the Center for Interdisciplinary Exploration and Research in Astrophysics (CIERA).

To construct the image with unprecedented clarity and detail, astronomers spent three years surveying the sky and analyzing data at the South African Radio Astronomy Observatory (SARAO). Using 200 hours of time on SARAO’s MeerKAT telescope, researchers pieced together a mosaic of 20 separate observations of different sections of the sky toward the center of the Milky Way galaxy, 25,000 light years from Earth.

The full image will be published in an additional, accompanying paper— led by Oxford University astrophysicist Ian Heywood and co-authored by Yusef-Zadeh — in a forthcoming issue of The Astrophysical Journal. Along with the filaments, the image captures radio emissions from numerous phenomena, including outbursting stars, stellar nurseries and new supernova remnants.

“I’ve spent a lot of time looking at this image in the process of working on it, and I never get tired of it,” Heywood said. “When I show this image to people who might be new to radio astronomy, or otherwise unfamiliar with it, I always try to emphasize that radio imaging hasn’t always been this way, and what a leap forward MeerKAT really is in terms of its capabilities. It’s been a true privilege to work over the years with colleagues from SARAO who built this fantastic telescope.”

To view the filaments at a finer scale, Yusef-Zadeh’s team used a technique to remove the background from the main image in order to isolate the filaments from the surrounding structures. The resulting picture astounded him.

“It’s like modern art,” he said. “These images are so beautiful and rich, and the mystery of it all makes it even more interesting.”

While many mysteries surrounding the filaments remain, Yusef-Zadeh has been able to piece together more of the puzzle. In their latest paper, he and his collaborators specifically explored the filaments’ magnetic fields and the role of cosmic rays in illuminating the magnetic fields.

The variation in radiation emitting from the filaments is very different from that of the newly uncovered supernova remnant, suggesting that the phenomena have different origins. It is more likely, the researchers found, that the filaments are related to past activity of the Milky Way’s central supermassive black hole rather than coordinated bursts of supernovae. The filaments also could be related to enormous, radio-emitting bubbles, which Yusef-Zadeh and collaborators discovered in 2019.

And, while Yusef-Zadeh already knew the filaments are magnetized, now he can say magnetic fields are amplified along the filaments, a primary characteristic all the filaments share.

“This is the first time we have been able to study statistical characteristics of the filaments,” he said. “By studying the statistics, we can learn more about the properties of these unusual sources.

“If you were from another planet, for example, and you encountered one very tall person on Earth, you might assume all people are tall. But if you do statistics across a population of people, you can find the average height. That’s exactly what we’re doing. We can find the strength of magnetic fields, their lengths, their orientations and the spectrum of radiation.”

What we don’t know

Among the remaining mysteries, Yusef-Zadeh is particularly puzzled by how structured the filaments appear. Filaments within clusters are separated from one another at perfectly equal distances — about the distance from Earth to the sun.

“They almost resemble the regular spacing in solar loops,” he said. “We still don’t know why they come in clusters or understand how they separate, and we don’t know how these regular spacings happen. Every time we answer one question, multiple other questions arise.”

Yusef-Zadeh and his team also still don’t know whether the filaments move or change over time or what is causing the electrons to accelerate at such incredible speeds.

“How do you accelerate electrons at close to the speed of light?” he asked. “One idea is there are some sources at the end of these filaments that are accelerating these particles.”

Yusef-Zadeh and his team are currently identifying and cataloging each filament. The angle, curve, magnetic field, spectrum and intensity of each filament will be published in a future study. Understanding these properties will give the astrophysics community more clues into the filaments’ elusive nature.

The MeerKAT telescope, which launched in July 2018, will continue to unveil new secrets.

“We’re certainly one step closer to a fuller understanding,” Yusef-Zadeh said. “But science is a series of progress on different levels. We’re hoping to get to the bottom of it, but more observations and theoretical analyses are needed. A full understanding of complex objects takes time.”

The study, “Statistical properties of the population of the galactic center filaments: The spectral index and equipartition magnetic field,” was supported by NASA and the National Science Foundation.

Statistical Properties of the Population of the Galactic Center Filaments: the Spectral Index and Equipartition Magnetic Field 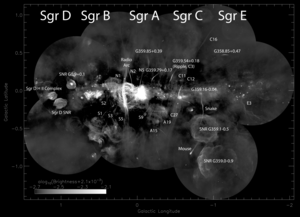 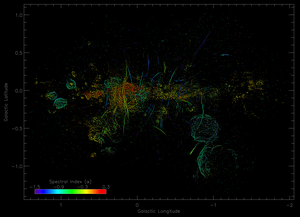 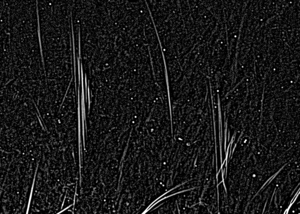