New Leicester space research has revealed, for the first time, a complex ‘tug-of-war’ lights up aurorae in Jupiter’s upper atmosphere, using a combination of data from NASA’s Juno probe and the Hubble Space Telescope.

The study, published in the Journal of Geophysical Research: Space Physics, describes the delicate current cycle driven by Jupiter’s rapid rotation and the release of sulphur and oxygen from volcanoes on its moon, Io.

Researchers from the University of Leicester’s School of Physics and Astronomy used data from Juno’s Magnetic Field Investigation (MAG), which measures Jupiter’s magnetic field from orbit around the gas giant, and observations from the Space Telescope Imaging Spectrograph carried by the Hubble Space Telescope.

Their research provides the strongest evidence yet that Jupiter’s powerful aurorae are associated with an electric current system that acts as part of a tug-of-war with material in the magnetosphere, the region dominated by the planet’s enormous magnetic field.

Dr Jonathan Nichols is a Reader in Planetary Auroras at the University of Leicester and corresponding author for the study. He said:

“We’ve had theories linking these electric currents and Jupiter’s powerful auroras for over two decades now, and it was so exciting to be able to finally test them by looking for this relationship in the data. And when we plotted one against the other I nearly fell off my chair when I saw just how clear the connection is.

“It’s thrilling to discover this relation because it not only helps us understand how Jupiter’s magnetic field works, but also those of planets orbiting other stars, for which we have previously used the same theories, and now with renewed confidence.”

Despite its huge size – with a diameter more than 11 times that of Earth – Jupiter rotates once approximately every nine-and-a-half hours.

Io is a similar size and mass to Earth’s moon, but orbits Jupiter at an average distance of 422,000 km; roughly 10% further away. With over 400 active volcanoes, Io is the most geologically active object in the Solar System.

Scientists had long suspected a relationship between Jupiter’s aurorae and the material ejected from Io at a rate of many hundreds of kilograms per second, but the data captured by Juno proved ambiguous.

“These exciting results on how Jupiter’s aurorae work are a testament to the power of combining Earth-based observations from Hubble with Juno measurements. The HST images provide the broad overview, while Juno investigates close up.  Together they make a great team!”

Much of the material released from Io is propelled away from Jupiter by the planet’s rapidly rotating magnetic field, and as it moves outward its rotation rate tends to slow down.  This results in an electromagnetic tug-of-war, in which Jupiter attempts to keep this material spinning at its rotation speed via a system of electric currents flowing through the planet’s upper atmosphere and magnetosphere.

The component of the electric current flowing out of the planet’s atmosphere, carried by electrons fired downward along magnetic field lines into the upper atmosphere, was thought to drive Jupiter’s main auroral emission.

However, prior to Juno’s arrival this idea had never been tested, as no spacecraft with relevant instruments had previously orbited close enough to Jupiter. And when Juno arrived in 2016, the expected signature of such an electric current system was not reported – and, while such signatures have since been found – one of the great surprises of Juno’s mission has been to show that the nature of the electrons above Jupiter’s polar regions is much more complex than was initially expected.

The researchers compared the brightness of Jupiter’s main auroral emission with simultaneous measurements of the electric current flowing away from the Solar System’s largest planet in the magnetosphere over an early part of Juno’s mission.

These aurorae were observed with instruments on board the Hubble Space Telescope, in Earth orbit. By comparing the dawn-side measurements of current with the brightness of Jupiter’s aurorae, the team demonstrated the relationship between the auroral intensity and magnetospheric current strength.

Stan Cowley is Emeritus Professor of Solar-Planetary Physics at the University of Leicester and co-author for the study, and has studied Jupiter’s powerful aurorae for 25 years. Professor Cowley added:

“Having more than five years of in-orbit data from the Juno spacecraft, together with auroral imaging data from the HST, we now have the material to hand to look in detail at the overall physics of Jupiter’s outer plasma environment, and more is to come from Juno’s extended mission, now in progress. We hope our present paper will be followed by many more exploring this treasure trove for new scientific understanding.”

‘Relation of Jupiter’s dawnside main emission intensity to magnetospheric currents during the Juno mission’ is published in the Journal of Geophysical Research: Space Physics. 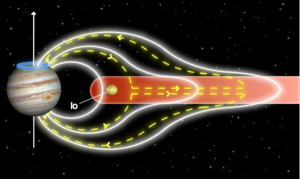