Predators kill prey and prey attempt to avoid being killed by predators; the former obviously reduces the number of prey but, according to a new study, fear (avoiding being killed) can itself halve the population size of prey in 5 years or less, by so impairing parental investment and care fewer than half as many young reach adulthood and those that do are permanently handicapped.

These findings by Professor Liana Zanette, her PhD student Marek Allen, and Michael Clinchy, from Western University’s Department of Biology, were published today in Proceedings of the National Academy of Sciences (PNAS).

Zanette and her team experimentally demonstrated for the first time in any free-living wild animal that the fear predators inspire can itself reduce prey population growth rates; thereby conclusively establishing that focusing solely on the number of prey predators directly kill and failing to additionally consider fear, as conventionally done, risks dramatically underestimating the total impact predators have on prey population size.

“These results have critically important implications for conservation, wildlife management and public policy” explains Zanette, a renowned wildlife ecologist. “The total ecosystem benefits gained from conserving or rewilding native predators, and the full devastation wrought by introduced predators, must all now be re-evaluated.”

The team experimentally tested the impact of fear itself on the population growth rate over multiple generations in free-living wild song sparrows.  Fear was manipulated over three annual breeding seasons using playbacks of predator or non-predator vocalizations and the effects on births and survival were comprehensively quantified throughout each year, together with evidence indicative of impacts on births and survival beyond the parental generation.

Watching for predators kept parents from finding food for themselves and their young.  This had cumulative, compounding adverse consequences, from fewer young being born, to fewer surviving each stage towards adulthood, and extending to those reaching adulthood showing evidence of impaired brain development likely to shorten their survival during adulthood – representing a transgenerational impact reducing population growth over generations.

“Fear effects on prey population growth rates are likely the norm in birds and mammals because parental care is a fundamental characteristic of most birds and all mammals and fear‑induced reductions in parental investment and care are commonplace”, contends Zanette.  “Having now demonstrated that fear itself can contribute significantly to the total impact predators have on prey populations, we expect this will be found to be true in most ecosystems”. 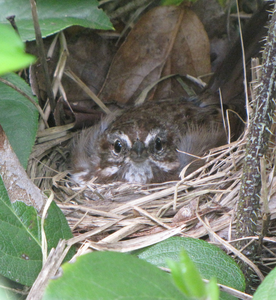 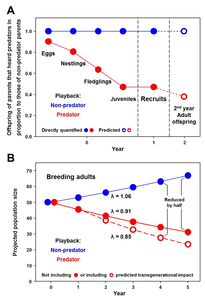