Coral reefs are hotspots of biodiversity and are amazingly productive with a vast number of organisms interacting simultaneously. Hundreds of molecules that are made by important members of the coral reef community were recently discovered by a team of scientists. Together, the compounds--modified amino acids, vitamins and steroids--comprise the “smell” or “taste” of corals and algae in a tropical reef, and will help scientists understand both the food web dynamics and the chemical ecology of these ecosystems.

The study, led by Scripps Institution of Oceanography at UC San Diego, University of Hawai‘i (UH) at Mānoa and the NIOZ Royal Netherlands Institute for Sea Research was published today in the Proceedings of the National Academy of Sciences.

Although coral and seaweeds (limu) are fixed to the seafloor, these organisms interact via chemicals dissolved in the water. Despite knowing the importance of these molecules built during photosynthesis and released into the seawater environment, their quantity, energy content and structural diversity have always been a mystery to biologists.

The team applied a cutting-edge analytical technique, known as untargeted tandem mass spectrometry, to characterize the thousands of small molecules that organisms use for growth, communication and defense.

“We have known for years that organic molecules play a big role in the fate of coral reef systems, but until now we did not have the analytical capabilities to analyze the dynamics of thousands of different molecules that make up the coral reef ‘exometabolome’,” said Andreas Haas, senior author on the work.

In the reefs surrounding Mo’orea, one of the Society Islands of French Polynesia, the team collected specimens from two reef-building corals (boulder coral and cauliflower coral), one calcified red alga (crustose coralline algae), one brown alga, and one algal turf (a mix of microscopic filamentous algae). Then, they isolated and analyzed the molecules that each organism released into the seawater during photosynthesis in the daytime and, separately, at night when photosynthesis ceases.

They found that these organisms release large amounts of hundreds of different compounds which ultimately influence the chemistry of the seawater. The compounds determine nutrient concentrations, the growth of decomposers and the availability of vitamins and minerals essential to the plants and animals which inhabit coral reefs.

Snapshot of the diversity

This study provides the first snapshot of the diversity of dissolved chemicals floating among coral reefs and a window into the interactions among organisms that scientists are just beginning to understand.

“There were several surprises with our findings,” said Linda Wegley Kelly, co-lead author of the work. “First, very few molecules were universal to all five of the organisms we studied. Even the two species of corals made few of the same molecules—more than 85% of the molecules we measured were unique to just one specific organism.”

The study demonstrated the release of over 1000 distinct molecules with diverse structures, pointing the way forward for new explorations into marine natural products.

Another key finding was demonstrating that the molecules released by corals contained many more nutrients than those made by algae, which may have strong implications for the availability of nitrogen, phosphorus, and sulfur in these reef ecosystems. Perhaps more importantly for reef food webs, the work showed that the combination of molecules released into the water by seaweeds were more chemically reduced.

Haas explained “Algae potentially provide more energy to bacteria in the reef than do corals, with implications for how increasing algae on reefs alters the transfer of energy through microbes into larger organisms in the reef ecosystem.”

Reefs worldwide are changing and degrading under local pressures from human misuse and overuse as well as global threats of ocean warming and acidification.

“One common global shift is a change from coral dominance to increasing biomass of limu, associated with a shift in the structure and function of the ecosystem and the quantity and types of fish and invertebrates that thrive there,” said Craig Nelson, co-lead author of the work. “Understanding what shifts like this mean to the chemistry of an ecosystem is critical for managers, and this work demonstrates differences in the chemical exudates of corals and algae that can help us understand what changes in coral and algae mean for the ecosystem.”

In future work, the team will observe how the diverse array of compounds behaves on the reef including which molecules disappear rapidly, which build up and whether any of the molecules are taken up directly by other plants and animals that make up the reef community.

Additional co-authors on the study include researchers from University of Tübingen (Germany), San Diego State University and University of California, Santa Barbara. 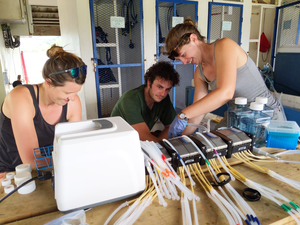