In a landmark discovery, FLEET University of Wollongong (UOW) researchers have realised the non-contact manipulation of liquid metal.

The metals can be controlled to move in any direction, and manipulated into unique, levitated shapes such as loops and squares by using a small voltage and a magnet.

The liquid metal used is galinstan, an alloy of gallium, indium and tin, which favours the formation of droplets due to its high surface tension.

Under the application of a small ‘triggering’ voltage, this liquid-metal becomes a wire as the voltage causes electrochemical oxidation which lowers the surface tension of the metal.

“Because these reactions require an electrical current passing through the wire, it becomes possible to apply a force to the wire via application of a magnetic field (ie, electromagnetic induction; the same mechanism as drives motion in an electric motor).

Thus, the wires can be manipulated to move in a controllable path, and can even be suspended (against gravity) around the circumference of the applied magnetic field, assuming controlled, designed shapes.” said Prof Xiaolin Wang the leader of this project.

“The non-contact manipulation of liquid metal allows us to exploit and visualise electromagnetism in new ways.”

“The ability to control streams of liquid metals in a non-contact manner also enables new strategies for shaping electronically conductive fluids for advanced manufacturing and dynamic electronic structures” said Wollongong PhD student Yahua He, the lead author of the study.

Non-contact methods of manufacturing and manipulation can minimise unwanted disturbance of objects being studied or manipulated. Previously developed non-contact technologies include object manipulation by acoustic manipulation or optical tweezers.

However, to date, free-flowing liquid streams have been particularly difficult to manipulate in a non-contact manner. Realising highly-controlled changes in directionality or complex shaping of liquids, especially without disrupting the cross-sectional shape of the stream, was the challenge for the team at UOW.

“There was an enjoyable element of discovery in this scientific process. Once the team started working on this topic, we realised that there is much more behind it,” said team leader Prof Xiaolin Wang.

“The liquid metal wires form by applying a small voltage (approximately 1 volt). However, our team found that a considerable electrical current (up to 70 mA) could be measured in the resulting wires.

The UOW team’s findings are published in the January issue of Proceedings of the National Academy of Sciences of the United States of America (PNAS), the world’s premier journal for multidisciplinary research. (DOI:**)

Prof Xiaolin Wang is a node leader and theme leader at the ARC Centre of Excellence for Future Low-Energy Electronics Technologies (FLEET), and led the research team from UOW’s Institute for Superconducting and Electronic Materials within the Australian Institute for Innovative Materials.

“By combining electromagnetic induction and fluid dynamics, we were able to manipulate the liquid metal in a controllable way, and move like soft robotics,” Professor Wang said.

“The research in liquid metals was inspired by biological systems as well as science fiction, including the shape-shifting, liquid metal “T-1000” robot in the James Cameron-directed film Terminator 2.”

“This research is more than science fiction, we have conceived and realised this non-contact method for liquids, offering a new way to manipulate and shape fluids.”

This non-contact manipulation is made possible by the material’s unique fluid dynamic and metallic properties. As soft, current-carrying conductors, the wires present minimal resistance to manipulation via Lorentz force under a controlling the magnetic field. Thus, the wires could be easily manipulated in designed ways.

“Usually, liquid streams break up into droplets. For example, streams of water coming from a faucet or hose start out as a cylinder, but quickly break up into droplets. However, the liquid metal wire has a string-like property, similar to waving ribbons in the air. That property allowed us to manipulate the liquid metal stream into continuous loops and other shapes,” said co-corresponding author Prof Michael Dickey (North Carolina State University).

This is a UOW-led collaboration with FLEET researchers at UNSW and North Carolina State University. The Australian Research Council supported the research through an ARC Future Fellowship Project and ARC COE in FLEET. 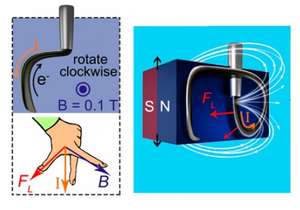 force induced on a current-carrying wire by a magnetic field