GRAND CAYMAN (Feb. 1, 2022) – In an unprecedented research project, 30 juvenile green sea turtles of varying ages have been released directly into the waters off Grand Cayman, the largest of the Cayman Islands, wearing tiny tracking devices that will monitor their movements.

The turtles carry prototype micro-satellite tags, weighing less than a penny and safely attached to the turtles’ shells using epoxy and neoprene-silicone mounts.

Sea turtles have been studied often as they hatch, and when they return to those beaches years later to breed. But the time in-between, when young turtles develop in the open sea, remains a mystery. This life history stage is often referred to as the “lost years”.

It’s difficult to find and study them in the ocean, given deep water and their vast ranges. Past research has relied on techniques such as drift simulations, mark-and-recapture studies, and visual observations, resulting in conflicting theories about sea turtles’ lives.

This project aims to change that. The turtles were divided into three different age groups: 1-2 years; 2-3 years; and 3-4 years. With the turtles simultaneously released from the same location, researchers will be able to observe how the different ages move through and interact uniquely with their environment.

The project was developed by Dr. George Shillinger, Executive Director of Upwell, and longtime Upwell collaborator Dr. Helen Bailey of the University of Maryland Center for Environmental Science. Nicole Barbour, Upwell researcher and doctoral student at the University of Maryland, will be analyzing the data as part of her graduate research. Upwell is funding the research and releasing the turtles, in partnership with Cayman Turtle Conservation and Education Centre (CTCEC).

“Endangered sea turtles face high mortality rates due to threats in our oceans, including fisheries bycatch, ship strikes, pollution, climate change and other detrimental human activities,” Shillinger said. “This research may provide critical information that will help conservationists protect them throughout their lives, because protecting turtles when they’re on the shore simply isn’t enough.”

CTCEC, also known locally as Cayman Turtle Centre, is a critical part of the research, as the only conservation organization that hatches turtles for release into the ocean. The turtles were raised, or “head-started,” at the Centre until they were large enough to release with a favorable chance of survival. Upwell focuses on research and conservation of turtles in their at-sea environments and is pioneering new techniques to shed light on the lost years for multiple sea turtle species.

“Pre-Columbus estimates of Green Sea turtle populations in the Caribbean range from 33 to 39 million.  Historically, the Cayman Islands has been considered the most important breeding and nesting area in the Caribbean. Today, this breeding population has been reduced to roughly 100 females and the IUCN Red List lists the green turtle as being ‘regionally extinct’ in the Cayman Islands,” Dr. Walter Mustin, Chief Research and Conservation Officer at CTCEC, said.

“The data collected from this collaborative research project with scientists for the Upwell Turtles Foundation, the Cayman Turtle Conservation and Education Centre, Mercator Ocean International, the University of Maryland, and Florida Atlantic University will help all of us understand more about the movements and behavior of juvenile greens and how to better conserve and protect this ecologically critical specie.”

The micro tags were designed by Lotek Wireless, in partnership with Upwell.

The satellite tag attachment methodologies utilized by the team were developed and defined by Dr. Jeanette Wyneken and her team at FAU Boca Raton. Upwell researcher and FAU postdoctoral scholar Dr. Sean Williamson and FAU doctoral student Emily Turla accompanied the team. Emily and Sean assisted with training the team in tag attachment methodologies and tagging the turtles. The turtles also were tagged with titanium flipper and Passive Integrated Transponder (PIT) tags, so they can be identified if encountered in the future.

Sea turtles are known to use the Earth’s magnetic field to navigate, but the mechanisms underlying that navigation and age-dependent behavioral shifts are poorly understood. Ocean currents and other environmental variables also influence sea turtles’ dispersal, movement, and behavior. This research will examine how variables such as age and size may influence turtles’ likelihood of encountering the best foraging habitats.

“We expect that younger juveniles will utilize open-ocean habitats and older juveniles will spend more time on the ocean bottom,” Barbour said. “This project is an opportunity to confirm what has only been speculated about so far.”

CTCEC is a leading sea turtle conservation organization, having released more than 34,000 turtles back into the waters surrounding the Cayman Islands. The species are an integral part of the islands’ identity, represented on the nation’s currency and flag.

Cayman Turtle Conservation and Education Centre (CTCEC) is a conservation, education, and scientific study organization, and one of the largest tourist attractions in the Cayman Islands. Its mission and work encompass a multifaceted approach to the conservation of sea turtles and other indigenous animals. Through an extensive and proven captive breeding, rearing and release program, the Centre’s focus is on green sea turtles but also includes other at-risk species such as the Cayman Parrot.

The aim is to sustain and increase the wild population of marine turtles which is furthered by sustainable harvesting of captive-reared turtles to support indigenous culinary traditions that utilize turtles, thereby removing the stimulus to take turtles from the wild. The organization advances the results through the release of captive-bred turtles into the wild, by collaborative scientific studies, and by integrating conservation with the education of visitors and residents.

Upwell’s mission is to protect endangered sea turtles by reducing threats at sea, including fisheries bycatch, ship strikes, pollution, and climate change. We believe there is an urgent and unmet conservation need: to protect sea turtles where they spend most of their lives, in the ocean. Upwell collects data on how sea turtles use different marine habitats at different stages of their lives and create targeted solutions to adequately mitigate threats they face at sea. 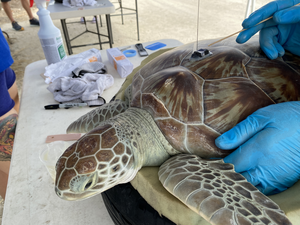 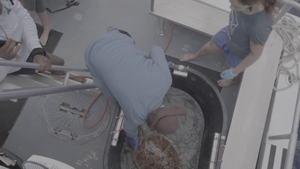