Cryoconite, a dark sediment that is a mixture of fine inorganic and organic matter, is found in shallow holes in the surfaces of glaciers. In Norway, surprisingly large amounts of artificial radioactive isotopes accumulate in it from the environment, as proved by research conducted by scientists from the Institute of Nuclear Physics of the Polish Academy of Sciences in Cracow.

Ionising radiation is an integral part of the human environment. Naturally occurring radioactive isotopes, such as lead-210, actinium-229, bismuth-214 or potassium-40, are mainly responsible for its presence on the surface of our planet (apart from cosmic radiation). Intensive nuclear weapons testing in the middle of the twentieth century and the Chernobyl disaster introduced a whole range of new radioactive isotopes into the atmosphere. For scientists, this is an opportunity to trace the processes of transport and accumulation of radioactive contaminants in the Earth's ecosystem. In a paper just published, physicists from the Institute of Nuclear Physics of the Polish Academy of Sciences (IFJ PAN) in Cracow report the discovery of unexpectedly high concentrations of arti­fi­cial radionuclides in material taken from a hole in the surface of one of Norway's glaciers.

“This is the first study of cryoconite from a Norwegian glacier that looks at natural and artificial radioisotopes. We focused on the Blaisen Glacier, located less than 200 kilometers west of Oslo,” says Dr. Edyta Lokas (IFJ PAN), the first author of the article published in Science of the Total Environment.

Anyone who has hiked on a real glacier is well aware that the surface is not uniformly white. In some places, it is even black, which is caused by cryoconite holes. The process of formation of such a hole begins in summer when impurities such as particles of rock matter are carried onto the bright surface of the glacier by wind, water and animals. Due to their colour being darker than their surroundings, these particles heat up more than ice. As a result, a water-filled depression appears around them, which only increases the efficiency of capturing the particles moving around in their vicinity.

A typical cryoconite hole is no more than a few dozen centimeters in diameter and depth. At its bottom there is a dark sediment called cryoconite. Apart from natural mineral substances, it can contain such contaminants as heavy metals, pesticides, antibiotics or micro-plastics. A significant part of the cryoconite mass is also biological matter – bacteria, including cyanobacteria, as well as protozoa, rotifers and tardigrades. It is known from earlier work by various scientific groups that this microbiome effectively captures radionuclides from its surroundings.

“The samples analysed came from twelve holes. We collected the material just before a heavy rain. When it stopped, we also took a sample from each of the five holes that survived the rainfall to check whether the flow of water can change the amount of artificial radionuclides contained in cryoconite,” says Dr. Krzysztof Zawierucha of the Adam Mickiewicz University in Poznan.

The presence of artificial radionuclides in the Blaisen Glacier is related to the radioactive con­ta­mi­nants released from Chernobyl and Novaya Zemlya, the main nuclear weapons testing ground in Soviet times. It is also important to note that in Scandinavia, rainfall is a particularly favourable factor for the accumulation of atmospheric pollutants, effectively transporting radionuclides from the atmosphere to the surface.

Cryoconite samples from the Blaisen Glacier had very high concentrations of artificial isotopes, in particular caesium-137 (clearly linked to the Chernobyl disaster), americium-241, bismuth-207, plutonium-239 and plutonium-240. However, these concentrations did not change in the material taken after the intense rainfall. This fact contradicts the intuitively plausible hypothesis of possible leaching of radionuclides from cryoconite by rainwater.

One intriguing fact drew the scientists' attention. Compared to cryoconite from other Scandinavian or Arctic glaciers, the proportion of organic matter in the samples studied was significantly higher, even at a level of 40%. The correlation between the increased radioactivity of cryoconite and the higher amount of organic matter within it is probably not a coincidence. According to the resear­chers, lemming populations that live near the glaciers may play a role here. These small mammals eat plant food, accumulating radioactive contaminants in their organisms. Many lemmings end their lives on glaciers, where their bodies decompose and release the pollutants that eventually end up in the cryoconite.

“The concentrations of artificial radionuclides in Norwegian cryoconite are among the highest found in the northern hemisphere. Higher levels have only been observed in some glaciers in Austria. In fact, the cryoconite of the studied Norwegian glacier is several times more radioactive than the cryoconite of the Svalbard glaciers,” notes Dr. Lokas, whose research was funded by the Polish National Science Centre.

However, the radiation emitted by Norwegian cryoconite does not pose a direct threat to humans or animals on the glacier. Although currently stable and acceptable, the situation regarding the presence of artificial radionuclides in Norwegian glaciers may worsen in the near future. Due to climate warming, the rate at which glaciers melt is increasing. This process is beginning to be noticed especially in the southernmost areas, which in the case of Scandinavia are more densely populated. As the ice melts, the radioactive contaminants it contains fall to the exposed ground, from where they can then be transported together with flowing water. It can therefore be expected that local bodies of water will in the near future start to accumulate radionuclides from a large area in their vicinity, from whence they will find their way into the bodies of fish and animals and eventually end up on our plates. At this stage of research, however, it is difficult to assess the potential scale of such a phenomenon and the associated risks.

The Henryk Niewodniczański Institute of Nuclear Physics (IFJ PAN) is currently one of the largest research institutes of the Polish Academy of Sciences. A wide range of research carried out at IFJ PAN covers basic and applied studies, from particle physics and astrophysics, through hadron physics, high-, medium-, and low-energy nuclear physics, condensed matter physics (including materials engineering), to various applications of nuclear physics in interdisciplinary research, covering medical physics, dosimetry, radiation and environmental biology, environmental protection, and other related disciplines. The average yearly publication output of IFJ PAN includes over 600 scientific papers in high-impact international journals. Each year the Institute hosts about 20 international and national scientific conferences. One of the most important facilities of the Institute is the Cyclotron Centre Bronowice (CCB), which is an infrastructure unique in Central Europe, serving as a clinical and research centre in the field of medical and nuclear physics. In addition, IFJ PAN runs four accredited research and measurement laboratories. IFJ PAN is a member of the Marian Smoluchowski Kraków Research Consortium: "Matter-Energy-Future", which in the years 2012-2017 enjoyed the status of the Leading National Research Centre (KNOW) in physics. In 2017, the European Commission granted the Institute the HR Excellence in Research award. The Institute holds A+ category (the highest scientific category in Poland) in the field of sciences and engineering.

“Unveiling the extreme environmental radioactivity of cryoconite from a Norwegian glacier”

Cryoconite is responsible for the dark colour of glaciers. (Source: IFJ PAN / UAM)

Dr. Edyta Lokas from the Institute of Nuclear Physics PAS in Cracow on a glacier covered with cryoconite holes. (Source: IFJ PAN / UAM)

Unveiling the extreme environmental radioactivity of cryoconite from a Norwegian glacier 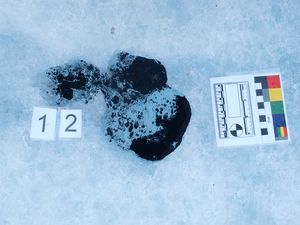 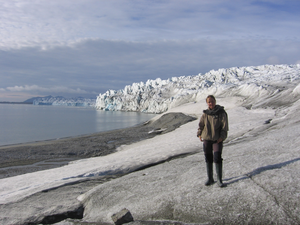 On a glacier covered with cryoconite holes.