Black holes aren’t always in the dark. Astronomers have spotted intense light shows shining from just outside the event horizon of supermassive black holes, including the one at our galaxy’s core. However, scientists couldn’t identify the cause of these flares beyond the suspected involvement of magnetic fields.

By employing computer simulations of unparalleled power and resolution, physicists say they’ve solved the mystery: Energy released near a black hole’s event horizon during the reconnection of magnetic field lines powers the flares, the researchers report January 14 in The Astrophysical Journal Letters.

The new simulations show that interactions between the magnetic field and material falling into the black hole’s maw cause the field to compress, flatten, break and reconnect. That process ultimately uses magnetic energy to slingshot hot plasma particles at near light speed into the black hole or out into space. Those particles can then directly radiate away some of their kinetic energy as photons and give nearby photons an energy boost. Those energetic photons make up the mysterious black hole flares.

In this model, the disk of previously infalling material is ejected during flares, clearing the area around the event horizon. This tidying up could provide astronomers an unhindered view of the usually obscured processes happening just outside the event horizon.

“The fundamental process of reconnecting magnetic field lines near the event horizon can tap the magnetic energy of the black hole’s magnetosphere to power rapid and bright flares,” says study co-lead author Bart Ripperda, a joint postdoctoral fellow at the Flatiron Institute’s Center for Computational Astrophysics (CCA) in New York City and Princeton University. “This is really where we’re connecting plasma physics with astrophysics.”

A black hole, true to its name, emits no light. So flares must originate from outside the black hole’s event horizon — the boundary where the black hole’s gravitational pull becomes so strong that not even light can escape. Orbiting and infalling material surrounds black holes in the form of an accretion disk, like the one around the behemoth black hole found in the M87 galaxy. This material cascades toward the event horizon near the black hole’s equator. At the north and south poles of some of these black holes, jets of particles shoot out into space at nearly the speed of light.

Identifying where the flares form in a black hole’s anatomy is incredibly difficult because of the physics involved. Black holes bend time and space and are surrounded by powerful magnetic fields, radiation fields and turbulent plasma — matter so hot that electrons detach from their atoms. Even with the help of powerful computers, previous efforts could only simulate black hole systems at resolutions too low to see the mechanism that powers the flares.

Ripperda and his colleagues went all in on boosting the level of detail in their simulations. They used computing time on three supercomputers — the Summit supercomputer at Oak Ridge National Laboratory in Tennessee, the Longhorn supercomputer at the University of Texas at Austin, and the Flatiron Institute’s Popeye supercomputer located at the University of California, San Diego. In total, the project took millions of computing hours. The result of all this computational muscle was by far the highest-resolution simulation of a black hole’s surroundings ever made, with over 1,000 times the resolution of previous efforts.

With its exceptional resolution, the new simulation for the first time captured how the magnetic field at the border between the flowing material and the black hole’s jets intensifies, squeezing and flattening the equatorial field lines. Those field lines are now in alternating lanes pointing toward the black hole or away from it. When two lines pointing in opposite directions meet, they can break, reconnect and tangle. In between connection points, a pocket forms in the magnetic field. Those pockets are filled with hot plasma that either falls into the black hole or is accelerated out into space at tremendous speeds, thanks to energy taken from the magnetic field in the jets.

“Without the high resolution of our simulations, you couldn’t capture the subdynamics and the substructures,” Ripperda says. “In the low-resolution models, reconnection doesn’t occur, so there’s no mechanism that could accelerate particles.”

Plasma particles in the catapulted material immediately radiate some energy away as photons. The plasma particles can further dip into the energy range needed to give nearby photons an energy boost. Those photons, either passersby or the photons initially created by the launched plasma, make up the most energetic flares. The material itself ends up in a hot blob orbiting in the vicinity of the black hole. Such a blob has been spotted near the Milky Way’s supermassive black hole. “Magnetic reconnection powering such a hot spot is a smoking gun for explaining that observation,” Ripperda says.

The researchers also observed that after the black hole flares for a while, the magnetic field energy wanes, and the system resets. Then, over time, the process begins anew. This cyclical mechanism explains why black holes emit flares on set schedules ranging from every day (for our Milky Way’s supermassive black hole) to every few years (for M87 and other black holes).

Ripperda thinks that observations from the recently launched James Webb Space Telescope combined with those from the Event Horizon Telescope could confirm whether the process seen in the new simulations is happening and if it changes images of a black hole’s shadow. “We’ll have to see,” Ripperda says. For now, he and his colleagues are working to improve their simulations with even more detail. 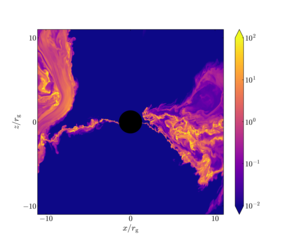