Everything in our universe moves, but the timescales needed to see motion are often vastly greater than human lifetimes. In a major new study, a team of astronomers from the University of Hawaiʻi Institute for Astronomy (IfA), University of Maryland and University of Paris-Saclay has traced the movement of 10,000 galaxies and clusters of galaxies, the dominant congregations of matter, within 350 million light-years. Their motions are followed throughout a span of 11.5 billion years––from the galaxies’ origins when the universe was only 1.5 billion-years-old, until today, at an age of more than 13 billion years.

The study has been accepted for publication in Astrophysical Journal.

Using a mathematical technique called numerical action method, the team has computed these paths based on the present brightness and positions of galaxies, and their present motion away from us. The astronomers have factored in the physics of the Big Bang theory, including the idea that galaxies initially start out expanding from each other almost precisely at what is called the Hubble expansion rate. Throughout time, gravity alters galaxy motions, so they are not just moving apart as the universe expands, but are drawn together into filaments, walls and clusters, while also emptying out other regions that are now voids. Over the eons of time, galaxies typically deviate from pure Hubble rate expansion by millions of light-years over a billion years. In regions of high density, the galaxy orbits can become quite complicated and involve collisions and mergers.

“We are bringing into focus the detailed formation history of large-scale mass structures in the universe by reverse engineering the gravitational interactions that created them,” said Ed Shaya, Associate Research Scientist at the University of Maryland.

There are several particularly interesting vast regions of high matter and galaxy density the astronomers explore. One, which has been called “the Great Attractor,” is the core of the Laniakea Supercluster, an immense supercluster of galaxies containing our own Milky Way. Galaxies can be seen flowing toward a location within a nest of four rich clusters.

A second fascinating region is in the adjacent Perseus-Pisces filament of galaxies, which stretches for nearly a billion light-years and is one of the largest known structures in the universe. The vicinity of the Virgo Cluster, the closest large cluster, is also seen, and can be studied in detail because it is nearby.

“For more than 30 years, astronomers have considered a ‘Great Attractor' to be the primary source of gravity that makes the whole region near us move with a high peculiar velocity relative to uniform cosmic expansion, but the nature of that source has been obscure,” said R. Brent Tully, an astronomer at IfA who co-authored the study. “Our orbit reconstructions have provided the first good look at this previously enigmatic region."

Across the entire expanse, the orbits can be projected into the future as well. The accelerating expansion of the universe dominates the overall picture, causing most galaxies to move apart. However, some coalescence and merging will continue in localized regions.

A video of the paths of galaxies in this vast region, starting from the epoch of early galaxy formation and continuing until the universe is almost twice as old can be viewed here. On the large scales depicted in this simulation, only a few major mergers, all in very dense regions, are seen to occur in the next 10 billion years.

The technical article is accompanied by four videos and four interactive models. 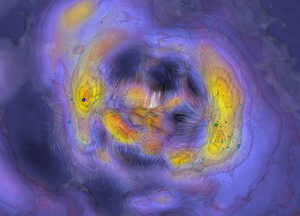 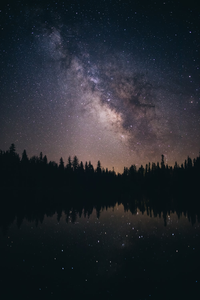