Make a probe capable of diving down to a depth of 300 metres. It must be able to measure salinity, temperature and pressure in the sea and must make three measurements per metre before it returns to the surface by itself. Finally, it must be inexpensive and so light that it can be flown out with and collected by a drone.

This was the challenge that three young engineer students, Ebbe Poulsen, Mathias Eggertsen and Erik Hinge Jepsen, accepted during their final year of their engineering studies.

Ebbe Poulsen and Mathias Eggertsen continued their work after graduation, and the probe has now passed the ultimate test during a voyage with the inspection vessel Knud Rasmussen in Northeast Greenland, where the two happy engineers breathed a sigh of relief after a year of tough preparations.

Northeast Greenland can be a quiet place. Completely silent. Especially if you are in a rubber boat at appropriate distance to a glacier inside Kong Oscars Fjord in Northeast Greenland. Here, a drone taking off sounds like a worn Husqvarna lawn mower on overtime.

But the noise does not destroy the breath-taking sight that it is to watch a large-sized drone fly towards the 50 m tall glacier wall and drop a yellow torpedo-like probe into the water directly in front of the glacier.

The probe straightens in the water. The small yellow flag at the top of the probe sticks up from the water before the entire probe disappears into the depths, and the drone returns to the ship.

This is the moment that Ebbe Poulsen and Mathias Eggertsen have been waiting for for more than a year.

More fresh water for the fjords of Greenland

The Greenland ice cap is melting at a disturbing speed. Increasingly large volumes of fresh water flow out into the fjords and the sea around Greenland. How does this affect life in the sea and the global ocean currents? This is one of the big questions that call for clarification.

Professor Søren Rysgaard, Arctic Research Centre, Aarhus University, has spent several years studying how melt water from glaciers in West Greenland flows out into the fjords. Together with a research group from Greenland Institute of Natural Resources, he has used disposable probes that measure pressure, temperature and salinity down through the water from the surface to the bottom of the fjord.

The research group dumped such a disposable probe from a helicopter right in front of a glacier in Godthåbsfjorden near Nuuk. While the probe sank down through the water column, it transmitted data back to a computer in the helicopter through a thin copper wire. When the probe reached the bottom, the copper wire was cut off, and the device disappeared in the water masses.

With the measurements, the researchers recorded the so-called ‘subglacial discharge’, where the glacier releases large amounts of fresh water at the bottom. When the light fresh water is released at the bottom of the fjord, it pulls nutrient-rich bottom water up to the surface layers. Here, the nutrients increase the production of algae that constitute the main food source for numerous fish and whales.

Need for a light and inexpensive probe

It is largely unknown how the fresh melt water flows out into the many fjords of eastern Greenland. Therefore, Søren Rysgaard has taken the initiative to a major research expedition from Cap Farewell in South Greenland to Kejser Franz Joseph Fjord in Northeast Greenland.

A collaboration with the Arctic Command has made it possible for a research group to sail with the Knud Rasmussen to these otherwise highly inaccessible areas. And in a range of fjords, the researchers have measured pressure, temperature, nutrients and salt concentrations down through the water column.

“It’s far too dangerous to sail in front of a glacier to drop a drone, and helicopter time is wildly expensive. Therefore, the idea arose of developing a light probe that a drone can fly in and drop off right in front of the glacier,” says Søren Rysgaard.

“The costs of research projects increase significantly when the equipment becomes too costly, and in the Arctic areas there is a high risk of losing equipment. Therefore, the objective was also to develop a probe costing about one-tenth of the price of commercial probes,” says Søren Rysgaard.

Engineer senior associate professor Claus Melvad from the Department of Mechanics and Production, Aarhus University, presented the project idea to his students, and Ebbe Poulsen, Mathias Eggertsen and Erik Hinge Jepsen had the courage to take on the task.

“We had not dreamt of how many problems we had to solve in the project, when we said yes,” say Ebbe Poulsen and Mathias Eggertsen from the deck of Knud Rasmussen.

In front of them is the result of more than a year’s work with working weeks exceeding 60 hours: a 2.6 kg heavy probe, which is now to be subjected to an ultimate test in front of a glacier in Kong Oscars Fjord.

“There are thousands of things that can go wrong in such a project,” says Claus Melvad, who has supervised the students and gives them great credit for their work.

Overall, Ebbe and Mathias have designed and constructed all probe components. This applies to 3D printing of all parts, circuit boards, soldering work and production of a pressure-tight container for electronics.

“We’ve learnt a lot from the project and explored areas outside our curriculum,” explains Mathias Eggertsen.

One particular challenge was to make the probe air-borne with a take-off weight of max. 25 kg including the drone. Due to the special compass conditions at Greenland, they had to build a drone that can fly without a compass in the flight controller, and which also has a long enough flight time to travel back and forth to a glacier from a proper safety distance.

This problem was solved in another of Claus Melvang’s bachelor projects, where Frederik Nilaus, Kristian Emil Schrøder Hansen and Asbjørn Riis Stephensen built a large drone that matched the requirements.

With the custom-built drone in place, Ebbe and Mathias could continue the work with the probe that was tested to a depth of 250 metres by McArtney in Esbjerg shortly before the departure to Greenland.

Back in Kong Oscars Fjord, the probe returns to the surface after some very long minutes.

At a specific depth, a small heating element burns the thin plastic strips that hold two iron weights. Relieved of this burden, the probe rises again towards the surface.

And for Ebbe Poulsen and Mathias Eggertsen, it is with equal relief and pride that they see the little yellow flag of the probe - containing their unique solutions – pop up over the water surface again.

“It's been like one long exam, which now ends with a good result,” says Ebbe Poulsen.

And the result is good. Because when the large amount of data are compared with data from commercial probes, they are almost identical.

“This opens up major perspectives. The sensors in this home-made probe only cost a few thousand Danish  kroner, and the data resolution they deliver is fully adequate,” says Claus Melvad.

Drones can fly the light probes over relatively long distances and drop them in places that are otherwise inaccessible. With time, the probes may be equipped with a transmitter that automatically sends data when the buoy reaches the surface.

“If, one day, we succeed in producing the probes in biodegradable material, any ship sailing in Greenland waters may drop a probe. This will provide access to many very important data that will help us to understand how the climate changes affect the sea currents around Greenland. We have incredibly limited data from this area,” says Søren Rysgaard.

The two young engineers would not hesitate to join new projects in close collaboration with biologists. They agree that the collaboration between the two disciplines has been extremely fruitful.

“Being with the research team on board Knud Rasmussen has been a huge experience. Now we’re going to go home and digest everything, and then we'll have to see which opportunities that may arise in the future," says Ebbe Poulsen.

Follow this link to watch a video about the test of the probe: Https://youtu.be/yD9Vky58_IA

Three young Danish engineers succeed in developing a cheap, autonomous probe for studies of the sea 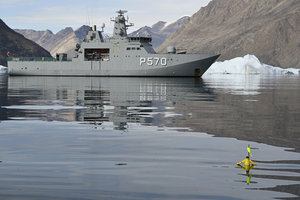 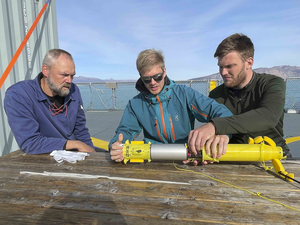 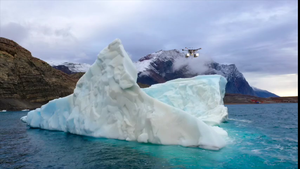