Blacklists are one of the most common policy measures to limit biological invasions. They identify small groups of highly impactful invasive alien species: species introduced outside their native range that threaten biodiversity. By doing so, they inform key decision-makers, who then impose limitations or bans on their trade and introduction, or set requirements about specific actions to manage already established populations.

In 2016, the European Union published the List of Invasive Alien Species of Union concern, which contains species that are banned from import, trade, and release in Europe. It had a certain echo in the media, and having come at a time where Internet searches are so pervasive that they can be used to measure public attention,  the Union List made a good case study for exploring blacklist impact on public awareness.

A research study, coordinated by Jacopo Cerri from the University of Primorska, Slovenia, and Sandro Bertolino from the University of Turin, Italy, explored if the publication of the Union List increased visits of the  Italian Wikipedia pages about invasive alien mammals, many of which were included in the list. Wikipedia is the largest online encyclopedia and a major source of information for motivated Internet users who go beyond search engines such as Google. As a comparison, the researchers used visits to Wikipedia pages about native mammals in Italy, and adopted a causal impact analysis to quantify differences.

The study found no effect of the publication of the Union lists over visits to Italian Wikipedia pages of invasive alien mammals, compared to pages about native mammals. After 2016, there were single peaks of visits to pages of some of the species, probably caused by viral videos and news about large-scale control initiatives or mass escapes from captivity. In one instance, peaks in visits aligned with news about the coypu - at the time, several national media outlets ran stories addressing the concerns of public administrations regarding the rodent’s impact on the stability of river banks. Similarly, a peak observed between late 2018 and February 2019 was likely caused by news about the release of 4,000 minks from a fur factory in Northern Italy, which attracted considerable attention in the national and regional media.

These attention peaks, however, did not last in time and don’t reflect a systematic change in public awareness about invasive alien species.

“Overall, our findings indicate that blacklists, despite having the potential to raise public awareness towards biological invasions, might fail to do so in practice,” the researchers conclude.

“Agencies who want to achieve this goal should rather develop tailored communication campaigns, or leverage on sensational news published in the media.”

How to get people interested in invasive species? Catchy news and viral videos 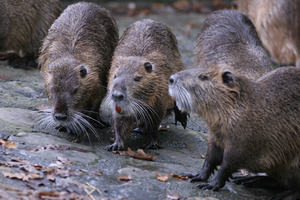