Imagine trying to understand how climate change affects vast tropical forests by determining how many trees die each year. Clouds get in the way of satellite views and on-the-ground estimates are expensive and impractical in remote areas. But researchers at the Smithsonian Tropical Research Institute (STRI) are excited by a new analysis that explains variation in tree mortality based on drone images of 1500 hectares of the most-studied tropical forest, Barro Colorado Island, in Panama.

There is concern that many large tropical trees will die as climate change intensifies processes that kill trees, like droughts and intense storms,” said KC Cushman, STRI post-doctoral fellow. “Large tropical trees contain a lot of carbon. When trees die and decompose, much of that carbon is released into the atmosphere, which could make climate change worse. However, for climate models to accurately predict whether more tropical trees will die, we need a better understanding of what conditions cause higher or lower tree mortality today. And that requires a reliable way to map tree mortality across large areas of forest.”

“Ground-based field work is impractical: you need to look at too many trees too often, because mortality rates are only about 2% per year,” said Helene Muller-Landau, STRI staff scientist and co-author of the study. And the 30-meter resolution images from LANDSAT satellites are good for detecting large disturbances that kill a lot of trees, like forest fires or hurricanes, but most dead trees are single individuals or small groups. Also, the forest greens up again fairly quickly after trees die, and because of cloud-cover we don’t have enough good satellite images to see the whole process.”

Their team used drones to solve the problem. By repeatedly piloting drones over 1500 hectares of forest during a five-year period, STRI research technician, Milton Garcia, provided a series of very high-resolution images that could be used to visualize much smaller disturbances. Based on the photos, they came up with a model of canopy height.

Another recent study led by STRI post-doctoral fellow, Raquel Araujo, analyzed monthly data from the ForestGEO long-term forest dynamics study site on Barro Colorado and found that most trees fell rather than dying while still standing, and it was more common for trunks to break than for the trees to be completely uprooted. Treefalls were concentrated during periods of heavy rainfall.

Disturbance rates were three times greater in some areas than in others. Most of the difference in disturbance from place to place could be predicted by three factors: the age of the forest, the type of soil and whether the land was steeply sloping or flatter (topography). Disturbances were more common in older than younger forests, as would be expected because trees are older and because tree height varies more in older forests, leaving some tall trees more exposed to storm damage. Soil type may be important because of the ability of trees to form deep roots. And greater disturbance on steep slopes could be explained simply by the steepness or because steep slopes are often more exposed to weather.

The team was pleased with the outcome of drone image analysis to accurately predict forest disturbances across a large area.

“To follow up, we hope to find out why more trees growing in certain soils died, and to test whether some tree species are more common in areas with high, as opposed to low rates of disturbance,” said Cushman. “Other collaborators with the Muller-Landau group want to place sensors on individual trees to find out how trees move during storms, and to create mechanistic models of mortality that capture the influences of windthrow, lightning, and more.”

“If tree mortality rates increase, then trees will be on average smaller—both shorter and smaller in diameter—forest canopy height will on average be shorter and forest carbon stocks will be smaller,” said Muller-Landau. Tree death is directly related to a decrease in the amount of carbon that a forest stores. A roughly 10% increase in mortality rate means a 9% decrease in forest carbon stocks, all else being equal.”

“Drones have given us a whole new perspective on tropical tree mortality on Barro Colorado Island, an iconic, long-term study site, by enabling us to monitor large areas and precisely pinpoint when trees die,” said Muller-Landau. Drone data complements traditional ground-based tree censuses here and remote sensing projects that have shown differences in forest structure across this landscape– but this is the first time that anyone has shown that these differences are driven by variation in tree mortality rates, which themselves are due to variation in soils, topography, and forest age.” 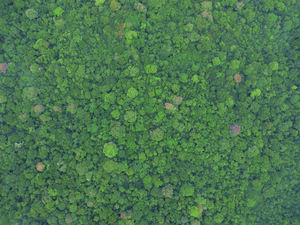 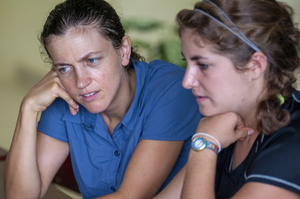