In a landmark study of airborne microorganisms from ground level up to 3,500 metres, scientists from the Singapore Centre for Environmental Life Sciences Engineering (SCELSE) at Nanyang Technological University, Singapore (NTU Singapore) have found that bacteria and fungi populate the planet’s lower atmosphere in very specific ways and if changed, may negatively impact human health and food supply.

Using a combination of a 200-metre meteorological tower and a research aircraft that circled at different heights from 300 metres to 3,500 metres to gather the necessary measurements, the researchers found that temperature was the single most important factor influencing the composition of airborne microbial communities.

As the temperature of the air changes, the species found and the ratio of bacteria to fungi change significantly. These findings suggest that the currently observed increase in global temperature will have an impact on the atmospheric microbial ecosystem, as well as planetary terrestrial and aquatic ecosystems.

The study was published today in the peer-reviewed journal Proceedings of the National Academy of Sciences of the United States of America (PNAS) by a team of interdisciplinary scientists led by NTU Professor Stephan Schuster, Research Director (Meta-'omics & Microbiomes) at SCELSE.

Atmospheric microorganisms, collectively known as the air microbiome, consist of bacteria and fungi, and largely remain suspended in air once they are blown off the planet’s surface.

Only a fraction of these microorganisms find their way back down to the surface, when they are washed down by rain droplets or fall back down together with larger particles such as sand grains or dust.

“If the composition of the air microbiome changes globally, it may affect human health, exacerbating respiratory syndromes in susceptible patients, or it could affect the yield of agricultural crops, which then threatens our food security. Natural processes that have worked for thousands of years such as carbon cycling of this planet may also be changed.”

“With our latest research paper, we are a step closer to showing that air has its own microbial ecosystem, much like those on land and in the sea. We expect that changes in the air microbiome will also have knock-on effects on terrestrial and aquatic ecosystems,” adds Prof Schuster.

The vertical map of microorganisms also provides a starting point for future ecological surveys and the necessary measures not only for the protection of global environments, but also for agricultural production sites, which may be negatively impacted by changes to the airborne microbial communities.

With the new dataset as a baseline, scientists can also model and predict the changes in the air microbiome if temperatures were to rise by two degrees or more, said the research team.

To measure the air microbiome high above the ground, the team used a specialised research aircraft from the Technische Universität Braunschweig, Germany, to collect synchronised measurements of meteorological parameters and airborne biomass samples up to a height of 3,500 metres.

The research team on the aircraft coordinated the sampling times with a team stationed at the 200-metre-high meteorological tower at the Karlsruhe Institute of Technology (KIT) in Karlsruhe, Germany.

A total of 480 vertical air samples were collected from Germany, which were brought back to Singapore to be analysed. The team was surprised to find that the composition of microorganisms above 1,000 metre was stable, independent of day or night. These air layers act as a “sink in the sky”, where bacteria accumulate in higher numbers than at the ground. The team identified over 10,000 different species of airborne microbes from the samples taken above 1,000 metres.

This was very different from the air samples that were taken below 300 metres, which were shown to follow the 24-hour day and night cycle (called the diel cycle), where the air composition changes from bacteria and some fungi dominating during the day, to wood-rotting fungi dominating in the night.

The discovery of the diel cycle of airborne microorganisms was first published in PNAS in 2019[1][1], when the same research team studied the tropical air in Singapore using air samples taken at various levels of a 50-storey high-rise residential building named Pinnacle@Duxton.

In its latest study, the team also reported that atmospheric turbulence – wind and weather – is the primary driver of microbial aerosol dynamics, which determines how microorganisms in the air are distributed.

Driven by the day/night temperature changes, air masses become layered (stratified) at night and mixed during the day, resulting in the stratification of the air microbiome across different heights of the lower part of atmosphere.

“For the first time, meteorological and biological data of the atmosphere were measured in unison, allowing us to develop a comprehensive hypothesis about the effects of atmospheric turbulence on the dispersal of microorganisms in the lower atmosphere,” said Prof Schuster.

Researchers further noticed that higher air layers contained an up-to-20-times higher concentration of radio-tolerant bacteria, which are known to withstand ionising radiation, desiccation, UV radiation, or oxidising agents. Of these bacteria, one species known as Deinococcus radiodurans is known to withstand a 1,000-fold higher radiation dose than the human body.

The team hypothesised that the ionising rays from sun and space had contributed to the development of radioactive tolerance in these bacteria at greater height, whereas bacteria on the ground have not been exposed to such levels of radiation.

Sampling for airborne life on Mars?

Based on their experiments, the researchers comment that their air sampling technologies could in principle, be used for investigating the atmosphere of neighbouring planets, such as Mars.

By tapping on the knowledge that microorganisms will aggregate in a planet’s atmosphere, it could provide an alternative to the current method of sampling, which is done by a robotic vehicle drilling and collecting soil samples.

For instance, a robot with an air sampler could collect microorganisms from the atmosphere by trapping them in an air filter, and sending the filter back to earth, in a potential future Mars sample-return mission.

The air microbiome study is one of SCLESE’s flagship research projects together with its research into terrestrial and aquatic ecosystems. The project was carried out over eight years, and has resulted in more than 40 papers, culminating with these results. The air microbiome research was supported by a Singapore Ministry of Education Tier 3 grant, SCELSE, and NTU.

Sustainability, climate change and the environment are key research pillars for NTU Singapore and are part of its Sustainability Manifesto launched last year. The University will continue fundamental and applied research to develop sustainable solutions that can mitigate the effects of natural disasters and climate change, and to meet the demand for food with alternative food sources.

Over the last two years during the pandemic, Prof Schuster and his team have pivoted to use their air sampling technology to detect and analyse the SARS-COV-2 virus from indoor air, a technique that demonstrated greater sensitivity than surface swab tests.

Moving forward, the team is planning to conduct more vertical air column studies in the tropics as well as at higher altitudes to enhance and extend their “atmospheric microbiome map”.

Vertical stratification of the air microbiome in the lower troposphere 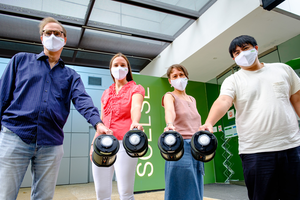 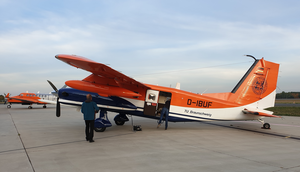 A specialised metrological research aircraft from the Technische Universität Braunschweig, Germany, which conducted the experiments in the sky 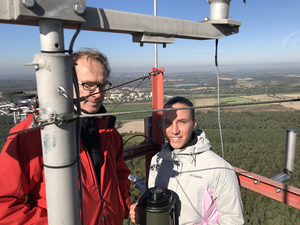 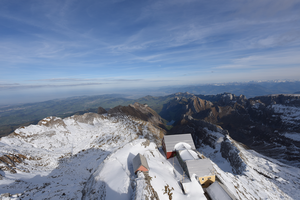 The view from the top of Mount Santis in Switzerland 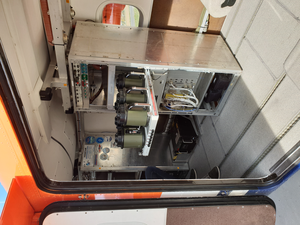