Approaching a traffic roundabout can conjure up consternation among motorists.

One West Virginia University researcher hopes to alleviate this confusion – and more importantly, vehicle accidents – by studying the feasibility of a newer type of roundabout called the “turbo roundabout.”

Popularized in Europe, turbo roundabouts are designed to limit weaving/lane changing movements. Their configuration forces drivers to choose an entry lane before entering the roundabout, eliminating the possibility of changing lanes within it.

They also have fewer conflict points (locations where vehicle movements are more hazardous than others) —10 to be exact compared to 16 for a traditional two-lane roundabout, said Kakan Dey, assistant professor of civil and environmental engineering.

“We have a disproportionate amount of crashes that happen at these traditional roundabout intersections,” Dey said. “Turbo roundabouts are intended to reduce conflict and the severity of the conflict. There are no lane changes happening within the turbo roundabout.”

Dey is spearheading a $254,000 project to investigate the implementation potentials of turbo roundabouts in Nevada. It’s being funded by the Nevada Department of Transportation.

Despite Nevada’s interest in pursuing the turbo roundabout, the research can have implications on introducing the concept in West Virginia and throughout the rest of the United States, Dey said.

The study, the first-of-its-kind in the U.S., according to Dey, will reveal how motorists respond to turbo roundabouts via a computerized driving simulator equipped with a steering wheel and video screen.

Dey’s team will develop scenarios with various design features. Gauging how participants fare in the simulations will guide the best solutions for potential implementation, he said.

“Often, as you know, people don’t like roundabouts, generally,” Dey said. “But once they go through them a couple of times, they get used to it. We expect a similar result with turbo roundabouts. Through the driving simulator, we’ll learn the difficulties that drivers may face.”

According to Transoft Solutions, which develops software for the civil infrastructure and transportation industries, traffic accidents are reduced by 72% on turbo roundabouts compared to their multi-lane counterparts.

Turbo roundabouts are widely popular in the Netherlands, and they plan to replace all traditional two-lane roundabouts with them, Dey said.

“There is no formal turbo roundabout in the U.S. yet,” he said. “But in Europe, there are a hundred or so.

“The findings of this project will assist transportation engineers/professionals with deep insights on the impacts of different design features of turbo roundabout. I am delighted to conduct this first-of-its-kind research project on turbo roundabouts in the U.S.” 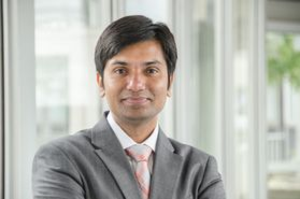