New research published today in the Journal of Archaeological Science Reports reveals how archaeologists can determine when a pot was used by Romans as a portable toilet, known as a chamber pot.

“Conical pots of this type have been recognized quite widely in the Roman Empire and in the absence of other evidence they have often been called storage jars. The discovery of many in or near public latrines had led to a suggestion that they might have been used as chamber pots, but until now proof has been lacking,” says Roger Wilson, a professor in UBC's department of classical, Near Eastern and religious studies who directs the Gerace archaeological project in Sicily where the pot was found.

Archaeologists at the University of Cambridge analyzed crusty material formed on the inside surface of a ceramic pot dating to the fifth century from a Roman villa site in Sicily. Using microscopy to identify intestinal parasites, the team from the Ancient Parasites Laboratory identified the eggs of whipworm, confirming that the vessel had once contained human faeces.

“It was incredibly exciting to find the eggs of these parasitic worms 1,500 years after they’d been deposited,” says co-author Tianyi Wang, University of Cambridge, who took part in the microscopy work.

Whipworms are human parasites that are about five centimetres long and live on the lining of our intestines. The eggs they lay get mixed in with the human faeces, and so would be deposited in a chamber pot during use. Minerals from urine and faeces built up in layers on the inner surface of the pot as it was repeatedly used, creating concretions.

“We found that the parasite eggs became entrapped within the layers of minerals that formed on the pot surface, so preserving them for centuries,” says co-author Sophie Rabinow, also of the Cambridge team.

This is the first time that parasite eggs have been identified from concretions inside a Roman ceramic vessel and confirms the Gerace pot must have been used to contain human faeces.

Although the measurements of the Gerace chamber pot (31.8 cm high with a diameter of 34cm at the rim) indicate it could have been used for sitting on, it was more than likely used in conjunction with a wickerwork or timber chair under which the chamber pot was set.

Ceramics are one of the most commonplace forms of archaeological artifact recovered from Roman sites. This technique provides a crucial tool enabling researchers to identify pots which had the special purpose of being a chamber pot, distinguishing them from those used as storage jars for food or other materials (although occasional alternative uses of such vessels have been documented).

The technique will only work if at least one of those people who used the chamber pot was infected by intestinal worms. Where such parasites are endemic in the developing world today, more than half of people are infected by at least one type of intestinal parasite. If Romans were infected as commonly, there is high probability that this approach will identify most such vessels as chamber pots if encrusted deposits are preserved.

Piers Mitchell, the parasites expert who led the study in the laboratory, says: “This pot came from the baths complex of a Roman villa. It seems likely that those visiting the baths would have used this chamber pot when they wanted to go to the toilet, as the baths lacked a built latrine of its own. Clearly, convenience was important to them.”

Mitchell adds: “Where Roman pots in museums are noted to have these mineralized concretions inside the base, they can now be sampled using our technique to see if they were also used as chamber pots.”

The identification of intestinal parasite eggs in chamber pots has the potential to advance our understanding of the sanitation, diet and intestinal health of people in the past.

The Gerace research project is funded by the Social Sciences and Humanities Research Council of Canada, under a permit granted by Regione Siciliana.

Identifying the portable toilets of the ancient Roman world 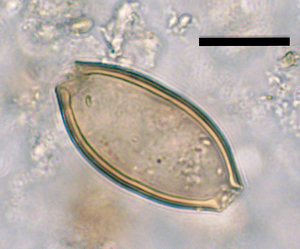 Whipworm from the chamber pot