Land plants absorb phosphate better when they collaborate with certain soil fungi. Arbuscular mycorrhiza (AM), a symbiosis with such fungi, is used by more than 80 percent of plants. The fungi penetrate the root cortex cells and form hyphal networks in the soil. These take up phosphate from the soil and transport it directly into the root, where it is released into the root cells via tree-shaped fungal structures called arbuscules.

Plants regulate the establishment of symbiosis

“Interestingly, the plant can regulate the establishment of the symbiosis according to its physiological condition. The symbiosis is promoted at low plant phosphate status and is inhibited when the plant has sufficient phosphate, for example as a result of fertilizer use,” says Caroline Gutjahr, Professor for Plant Genetics at TUM. “This likely happens in order to conserve organic carbon, which the plant supplies to the fungus.” Although this phenomenon was first observed around 50 years ago, the molecular mechanism for inhibiting the arbuscular mycorrhiza at high phosphate status was unknown.

A protein called PHR is a key transcription factor in the process. Transcription factors are proteins that control the copying of DNA into mRNA, thus ensuring that finally the required quantity of a protein is formed. PHR activates genes that enable the plant to respond to a phosphate deficiency.

Experiments with rice – one of the most important agricultural crops

“We wanted to find out how the formation of arbuscular mycorrhiza is regulated depending on phosphate availability. Our hypothesis was that PHR might be responsible,” says Prof. Gutjahr. In addition to lab results with rice and the model legume Lotus japonicus, the researchers also conducted an experiment in soil from rice fields. They were able to show that PHR is needed to promote AM symbiosis when soil phosphate is low to ensure normal grain yields.

A key result of the study is that PHR not only regulates classical phosphate deficiency genes, but also an entire group of genes required for the establishment and function of AM. These include, for example, biosynthesis genes for the hormone strigolactone. This hormone is produced by the plant and released into the soil where it activates and attracts the fungus.

AM symbiosis has enormous potential for application in sustainable agriculture by reducing the need for artificial fertilizers. “Our insights could be used to modify the phosphate sensitivity of plants through selective breeding or gene editing,” says Prof. Gutjahr.

The improved uptake of phosphate is not the only benefit of AM. It also promotes the absorption of other nutrients such as nitrogen, potassium and sulphate and improves plant resistance to various stressors such as drought. “By tuning PHR, for example, we could reduce the phosphate sensitivity of plants and promote the symbiosis at higher concentrations of phosphate in the soil and thus use its other benefits for agricultural production,” says the Professor of Plant Genetics.

Root symbiosis is regulated through nutrient status of plants 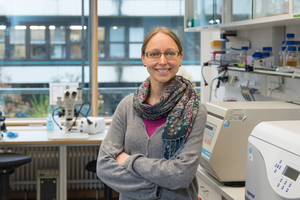