With a surface larger than all the continents together, the Pacific Ocean is the most extreme environment a migratory bird can encounter. Yet there are several bird species that conquer this enormous body of water almost routinely. In the latest issue of the scientific journal Ornithology, migratory bird researchers from the Netherlands, the United States and Canada provide a synthesis of all the knowns, and especially the many unknowns about the extreme performances of migratory birds such as bar-tailed godwits, whimbrels and red knots, which fly over the Pacific Ocean.

More efficiently than thought
The biggest unknown appears to be the energy consumption of the birds. A bar-tailed godwit departing from Alaska weighs more than a pound (485 g) on average. Once it arrives in New Zealand, only 215 g of that remains. "When we start calculating from the energy content of the fat burned and the assumed air resistance of birds, it seems that a bar-tailed godwit can fly for a maximum of 4 days at a time," lead author of the paper, migratory bird researcher Theunis Piersma of NIOZ, Royal Netherlands Institute for Sea Research and University of Groningen says. "The truth is, they fly for an average of up to 9 days at a time. We know this from research with satellite-tagged birds. We therefore must conclude that the birds fly much more efficiently than what we calculate on the basis of known flight properties."

Meteorologists
In addition to being efficient fliers, birds also appear to be good meteorologists; to the enormous surprise of the meteorologists among the researchers. For example, birds adapt their departure from the northern hemisphere to the weather systems they will later encounter over the southern hemisphere. In addition to this meteorological knowledge, birds also have an 'internal GPS' and a map of the vast ocean, according to the researchers. Piersma: "There is no other way to explain how bar-tailed godwits departing from Alaska, fly over the open ocean almost without land marks, continuously adjusting for wind drift, and then arrive spot-on in New Zealand 12,000 kilometers later."

Affected habitat
Departures from wintering areas are also adjusted to changes that individual birds have observed in previous years during migration. Piersma: "Bar-tailed godwits flying from New Zealand to Alaska refuel in the Yellow Sea, off the Chinese and Korean coasts. We have seen that individuals can leave earlier the following year. This could very well be an adaptation to the worsening food situation in the Yellow Sea. It is important to note that this could therefore be an adjustment of individual animals, in addition to an evolutionary process, where 'earlier birds' have an evolutionary advantage over later ones."

Warning
The overview of scientific knowledge on Pacific migrants is, in a sense, a wish list of the researchers: what remains to be discovered? "At the same time, it is also a warning," Piersma says. "Changes to the habitat of migratory birds and certainly changes in climate can have enormous consequences for the fragile balance during such an immense endeavor as migrating across the Pacific."

Unofficial world record
The world record holder for long-distance migration is a bar-tailed godwit that departed Alaska on September 16, 2020 with a transmitter on its back. The bird arrived in New Zealand eleven days later, after a flight of a whopping 12,854 km. "We know that these severely emaciated birds want only one thing after arrival: not to eat but to sleep," said Professor of Migratory Bird Ecology Theunis Piersma. "This is still an unofficial record, though. Only when this achievement is recorded in a peer reviewed scientific journal, does the record really count."

The Pacific as the world’s greatest theater of bird migration: Extreme flights spark questions about physiological capabilities, behavior, and the evolution of migratory pathways

Pacific Ocean as the greatest theater of bird migration 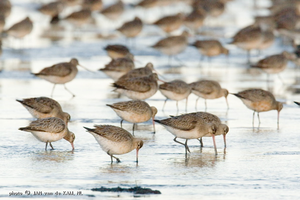