A long-term study in the Southern Ocean reveals a clear correlation between warming waters, decreased sea ice, and reduced abundance of Antarctic silverfish. These small, abundant fish are important prey for penguins, seals, and other regional marine life, in a role similar to that played by anchovies or sardines in more temperate waters.

The study was published in the February 3rd issue of Communications Biology, an open-access journal from Nature Portfolio. Lead author Andrew Corso, a doctoral candidate at William & Mary’s Virginia Institute of Marine Science, says “This is the first statistically significant relationship reported between sea ice and the long-term abundance of any Antarctic fish species. With continued regional warming, these fish could disappear from the region entirely, triggering major changes in the marine ecosystem.”

Co-authors on the study are Drs. Deborah Steinberg and Eric Hilton of VIMS, along with Dr. Sharon Stammerjohn of the Institute of Arctic and Alpine Research at the University of Colorado, Boulder.

The study is based on Corso’s analysis of more than 7,000 larval fish specimens collected over 25 years (1993–2017) as part of VIMS’ participation in the NSF-funded Palmer Antarctica Long-Term Ecological Research program. The Palmer LTER is an ongoing investigation of the effects of climate change on the ocean food web along the west coast of the Antarctic Peninsula.

Steinberg, who leads VIMS’ participation in the Palmer LTER program, says “Our study area is one of the most rapidly warming regions on Earth, with increases in air and water temperatures leading to substantial reductions in sea-ice coverage over the last half century.” From 1945 to 2009, the mean winter air temperature in the region rose by 10.8 °F (6 °C), while the annual duration of sea ice has decreased by almost 2 months.

The larval samples are stored in the Nunnally Ichthyology Collection at VIMS, which now holds the world’s second largest—and still growing—assemblage of Antarctic fishes, with more than 40,000 individual specimens. Hilton, who curates the Collection, says the research reported in the study is a “great example of the value of curated, cataloged, and archived natural history collections working in synergy with long-term ecological programs.”

Adaptations that allow Antarctic silverfish to thrive in the region’s frigid waters—they can make up more than 90% of fish biomass in coastal areas of the Southern Ocean—also make them susceptible to ocean warming and loss of sea ice.

“Sea ice plays a unique role in the life history of these fish,” says Corso. “They deposit their eggs within sea ice—which also serves as a nursery area for newly hatched larvae—so a loss of sea ice for them is akin to a loss of milkweed for monarch butterflies.”

The health of these fish, both larvae and adults, is also likely to be impaired by warmer water temperatures. Previous experiments with closely related Antarctic fishes have shown that a 9 °F (5 °C) increase in water temperature can kill some species outright, and also reduce the rate at which these fishes assimilate their food.

“We show that warmer sea surface temperature and decreased sea ice are associated with reduced larval abundance,” says Corso. Other studies in the region support and extend this discovery, having recorded a lower abundance of adult silverfish in the northern section of the Western Antarctic Peninsula for several decades.

“Our findings support a narrow sea-ice and temperature tolerance for adult and larval silverfish, and show that they require sufficient sea ice coverage to spawn successfully,” says Corso. “With precipitous climate change impacting the western Antarctic Peninsula, this species could disappear from the region entirely, triggering changes both up and down the food web.”

Those changes may have already begun. Other scientists involved in the Palmer LTER program have linked a substantial decline of Adélie penguins in the region with a long-term decrease of silverfish in their diet. The same researchers have also found that silverfish are important to the fledging and survival of Adélie chicks. 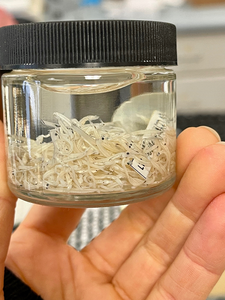 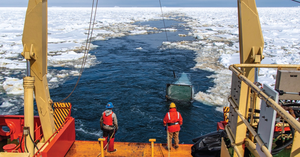