Duluth, Minn. — The University of Minnesota Sea Grant Program and partners are investigating new strategies for increasing in-state production of Golden Shiner for Minnesota’s bait industry. The project is supported by a three-year $188,000 grant from the Minnesota Environment and Natural Resources Trust Fund as recommended by the Legislative-Citizen Commission on Minnesota Resources.

Golden Shiners are a much sought-after bait fish that are in high demand by Minnesota anglers, but are in short supply.  In Minnesota Golden Shiner require two years to grow to maturity in the wild and Minnesota’s long, cold winters make raising them commercially for bait in natural ponds challenging.

“There is pressure from anglers, bait dealers, and legislators to import Golden Shiner from other states, though this is currently prohibited by law in Minnesota,” said Don Schreiner, Minnesota Sea Grant fisheries specialist and project member. “The primary concerns are that importation can introduce aquatic invasive species, disease, and parasites that may harm native fish communities.”

Recreational fishing is one of Minnesota’s largest industries, with an estimated value of $2.4 billion, according to the 2011 National Survey of Fishing, Hunting, and Wildlife-Associated Recreation by the U.S. Fish and Wildlife Service.

“If successful, this project could increase the supply of in-state grown Golden Shiners for anglers and create new in-state business opportunities for growing bait,” said Schreiner. “Project success would also reduce the pressure to consider importation.”

Golden Shiners are thin, deep-bodied minnows with small, upturned mouths and deeply forked tails. During the breeding season males turn a deep golden color, which may have given the fish their name. They are relatively small fish that reach a maximum length of about six inches. The 2018 United States Department of Agriculture Aquaculture Census reported that Golden Shiner were the most valuable baitfish produced in the U.S. with $16.4 million in total sales and more than 3.9 million pounds sold.

The first of Sea Grant’s four project strategies is to grow Golden Shiner from eggs to a market size of about three to four inches in one growing season (instead of the usual two years) using an entirely indoor recirculating aquaculture system or RAS. Using a RAS, which continuously filters and reuses water from the fish tanks, can dramatically reduce the amount of water and space required to intensively produce fish and seafood products.

The second strategy is to raise Golden Shiner from egg to market size indoors using aquaponics, which is a combination of aquaculture, which is growing fish and other aquatic species, and hydroponics, which is growing plants without soil. The roots of hydroponic plants function as a biofilter. They strip ammonia, nitrates, nitrites and phosphorus from the fish wastewater. Then, that clean water is circulated back into the fish tanks.

The third strategy is to raise Golden Shiner from egg to sac fry, which are about a half inch to one inch, and then move the sac fry to constructed outdoor ponds each May. Sac fry are still attached to their yolk sack, which they live on (absorb) when they are first put in the pond. Once the yolk sac is gone, the fish are big enough to feed on naturally occurring zooplankton in the pond. The sac fry stay in the outdoor ponds over a summer until they grow to market size, then they are harvested in October.

The fourth strategy is to raise Golden Shiner from egg to fryling indoors in a recirculating aquaculture system (RAS). The frylings stay in indoor tanks where they are trained to eat progressively larger and larger food. This feed-training can give frylings a two to three month head start on growth over fish grown in the wild. Frylings are moved to outdoor ponds when they are one to two inches long, grow over the summer and are harvested in October.

WHAT IS SEA GRANT?
Minnesota Sea Grant is a federal-university partnership that brings water science  to communities. We serve Minnesotans at work, at home, and at play. We are a systemwide program of the University of Minnesota with offices on the Duluth and St. Paul campuses. 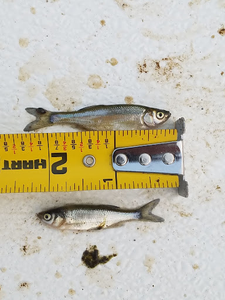