Tokyo, Japan – Researchers from Tokyo Metropolitan University have used computer simulations to model how a composite material reacts to loading. They studied a particle model of a pillar of stiffer material in a soft matrix, finding a concentration of force around the pillar with a broadness that differed from theory. The team found this was due to subtle changes in density near the pillar, a new principle to be considered in composite material design.

When you build a house of cards, it’s not enough to have cards with the right weight or stiffness: the trick is how you put them together to make a stable structure. The same thing can be said about composite materials. When scientists think about materials made of lots of different components, the properties of the final product are not just a linear sum of its parts, but strongly dependent on its complex internal structure. Composites encompass a vast range of materials, from those that make up our bodies like bone and muscle, to bulk materials like plastic resins and reinforced concrete; the study of how physical properties like stiffness and ductility arise from their structure is a key facet of modern materials science.

A team led by Professor Rei Kurita from Tokyo Metropolitan University have been using computer simulations to study how composite materials react to external forces. They constructed a “soft particle model” made of beads arranged in a pattern that attract or repel each other in a confined space. The strength with which they do so determines how soft or hard the “model” material is. In their most recent work, they studied how a pillar of stiff beads surrounded by softer beads reacts to an external load, like if a weight was applied to the material. Their work was aimed at studying how simple composite materials react to a load. Though they quickly found that the reactive force of the material was concentrated around the stiff pillar, as expected from classic models, it was clear that the lateral range over which the force was spread was significantly wider than predictions.

The team explored how each of their soft particles were displaced under load, discovering that the vertical displacement was very uniform, much like the different segments of a spring under load. However, this was not the case for displacements perpendicular to the load. Contrary to theory, the effect of the load was spread over a significant distance from the pillar. This caused minor changes in the distance between the particles, which effectively led to less particles per volume, or density. This incredibly subtle change was what led to a significant departure in the response of the material compared to “continuum” models which neglect the material’s particulate nature. The effect was not seen when the interparticle interactions were made attractive instead of repulsive since the attraction made material much less prone to local density changes.

Despite the simplicity of the model, the results highlighted by this work show that incredibly subtle features of composite materials can lead to vastly different physical properties. The team hopes the generality of their findings helps inspire a wider range of explorations into the design and applications of composite materials.

Origin of nonlinear force distributions in a composite system 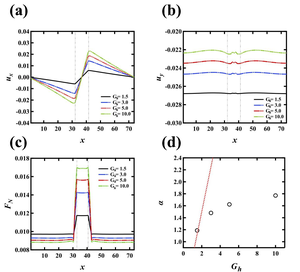 Reaction of a composite material under load.