The beneficial bacterium Pseudomonas protegens protects plants from fungi and bacteria. However, behind this seemingly selfless act lies a complex system by which the bacteria try to occupy a biological niche by eliminating their competitors. For this purpose, bacteria have developed a whole arsenal of poisons and a variety of injection systems to prepare them for battle.

One of the most widely-used injection machinery in Gram-negative bacteria is the type VI secretion system. When this machinery is activated, a nanotube is assembled in the cell interior, through which a poison dart with deadly toxic proteins on its tip is shot into a competitor. The 3D structure of one of these toxic proteins, the bacterial RhsA effector, has now been solved by the team of Stefan Raunser along with the team of John Whitney. The scientists found that the RhsA effector consists of three connecting pieces: the toxic weapon itself, a cocoon surrounding it, and a cork-like plug which seals the toxin encapsulating cocoon entirely.

“The cocoon protects the bacterium from its self-produced toxin”, Stefan Raunser says. “We already observed a very similar strategy in bacterial Tc toxins.” The scientists have shown that the effector protein itself cleaves the seal and the toxin from the rest of the protein, thereby unlocking the deadly weapon. However, the release of the toxic component is not yet possible since the seal keeps the cocoon secured. “We suspect that when the poison dart penetrates the enemy bacterium, mechanical force is generated to remove the cleaved seal, similar to when a champagne cork pops. This would ensure that the toxin is released in the right place at the right time” Stefan Raunser says.

In a series of earlier collaborative projects, the scientists have already gained a lot of knowledge about how the T6SS injection system works. They were able to reveal how effectors are transported inside the cell, how they are loaded on the poison dart and how the dart is then delivered into the host cell. “Our latest collaborative work now provides molecular insights into the arming process of Rhs effectors and its importance for toxin release. I am quite optimistic that our continued collaboration will uncover even more details of the T6SS machinery. This could one day allow for the engineering of bacteria with improved pathogen suppression capabilities useful for antibacterial and antifungal applications” John Whitney says.

Bacteria’s hidden weapon: Toxins locked inside a capsule secured by a cork 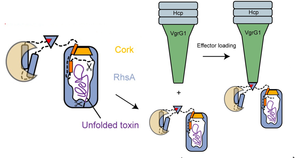 Model showing arming of the effector (blue) and the poison dart (green).