This pioneering project was announced today by Minister for Trade and Industry Mr Gan Kim Yong at the Global Space and Technology Convention (GSTC) held at Sheraton Towers.

Led by NTU’s Satellite Research Centre, the consortium will build a 100-kilogramme remote sensing microsatellite – the size of a mini-fridge. Advising on the systems development and manufacturing of the satellite will be ST Engineering Satellite Systems, a joint venture between ST Engineering, DSO National Laboratories and NTU.

This new microsatellite will fly at a Very Low Earth Orbit (VLEO), some 250 kilometres above Earth. This is at least half of the Low Earth Orbit altitudes (500 to 800 km) commonly used by conventional satellites, such as the X-SAT, Singapore’s first locally built satellite developed by NTU and DSO National Laboratories, launched in 2011.

Flying at VLEO brings with it the promise of differentiated capabilities, such as instruments being able to perform better as they are closer to Earth.

However, the challenges of flying at VLEO include satellites de-orbiting and re-entering Earth’s atmosphere in just a few days, if the satellites are not equipped with a suitable propulsion system.

A unique, fuel-efficient engine built by Aliena, a spin-off company from NTU Singapore, has been designed to overcome this issue. The engine will ionise and accelerate inert propellant, generating thrust at low power that will maintain the satellite’s orbit.

The microsatellite will also house the nation’s first locally-designed space camera by tech firm LightHaus Photonics, which can take high-resolution images of objects as small as 0.5 metres – about the size of a delivery parcel – 20 times more powerful than X-SAT’s camera. It is useful for industrial applications, such as supply chain monitoring, agriculture and mining, and real estate analytics.

In addition, NTU researchers will be developing a predictive aerodynamic model to optimise the satellite design for reduced drag, evaluating different materials that can protect against atomic oxygen corrosion, and measuring the plasma concentration, velocity and temperature in the ionosphere to enhance the understanding of spacecraft charging.

Spacecraft charging is a phenomenon where a negative charge starts to build on a satellite’s surface due to hot electrons found in space (similar to how static electricity builds up when humans walk across carpets) which can cause damage to electronic systems onboard the satellites. (See Annex A)

The satellite will also collect valuable data to enable the development of the next generation of commercial VLEO satellites with multiple applications, from communications and imaging to climate and weather monitoring, which will help to position Singapore as a VLEO solutions hub.

This new satellite is also designed to be sustainable. At the end of its operational life, its engine can be turned off and the satellite will de-orbit and descend to Earth within a few days. It will eventually burn up in the atmosphere during re-entry, leaving no debris in space.

This “passive clean-up” will help to minimise risk of collisions in future for VLEO spacecrafts, in contrast to operating at Low Earth Orbits where it is increasingly getting overcrowded.

Led by NTU’s Satellite Research Centre, the consortium also includes Temasek Laboratories at NUS and NTU, and ST Engineering Satellite Systems – a joint venture between ST Engineering, DSO National Laboratories and NTU – which serves as the lead advisor on the systems development and manufacturing of the satellite.

Professor Lam Khin Yong, Senior Vice President (Research), NTU Singapore, said the new microsatellite will be yet another milestone for Singapore and the University, which has spearheaded Singapore’s satellite research efforts in the last 22 years. NTU has successfully launched and operated nine satellites that has space-proven various novel made-in-Singapore technologies (See Annex B).

“Satellite technologies are always multidisciplinary and complex, requiring the best minds in various fields, from power systems engineering to aerodynamics and software design, to work together as a team to develop new solutions that do not exist today. NTU is also proud to partner our own spin-off company Aliena and joint venture company ST Engineering Satellite Systems, both great examples of how NTU’s space technologies have successfully made it from lab to market, contributing to the nation’s rising reputation in the global space industry,” Prof Lam said.

Mr David Tan, Executive Director, OSTIn, said “The establishment of a new consortium to develop solutions that will enable satellites to operate at very low earth orbit is testament to the diverse capabilities of Singapore’s industry and academia in developing disruptive technologies for space. OSTIn is pleased to support this collaboration which showcases the advanced capabilities of our local space industry ecosystem, with more than 50 companies employing over 1,800 professionals, complemented by several research centres of excellence.”

Dr Lim Jian Wei Mark, CEO of Aliena, said that the company’s involvement in this project is aligned with its corporate vision of providing high resolution images through enabling future satellite constellations to orbit closer to the Earth, “At the heart of any Very Low Earth Orbit (VLEO) mission are the engines that enable extended operations in such a challenging domain, to make future opportunities commercially viable. Aliena is proud to contribute towards the deployment of our MUSIC engines on such a satellite platform in VLEO, and to showcase that the VLEO domain in space can now be accessible even to smaller satellites with the systems we are bringing to market.”

This sets the stage for the deployment of Aliena’s VLEO microsatellite imaging constellation that will begin to be populated by 2027, thereby illustrating the seamless translation of technologies that can address new business segments through market capture and creation."

LightHaus Photonics Chief Technology Officer Dr Phua Poh Boon said: “Our LightHaus team is excited to be part of this special satellite mission and become the first Singaporean company to build a space optical payload. Our unique approach will give a cost-effective solution to high resolution space imaging.”

Mr Goh Ing Nam, General Manager, ST Engineering Satellite Systems said, “Ecosystem partnerships like this are crucial to push the boundaries of space technology innovations to meet real-world needs and for the continued advancement of Singapore’s space industry. We are pleased to lend our expertise in end-to-end satellite services and to partner our local tech start-ups and institutes on this exciting pioneering project.” 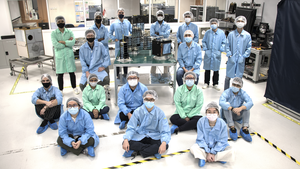 Researchers from the Satellite Research Centre at NTU Singapore, the birthplace of Singapore's space and satellite programmes 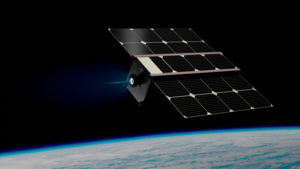 A 3D rendering of a small satellite flying through space using a unique, fuel-efficient engine built by Aliena 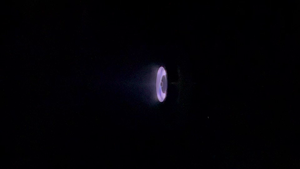 Plasma coming out of a unique, fuel-efficient thruster for small satellites, built by Aliena